The title of the novel has been taken from the last paragraph of ‘The Memoirs of Aga Khan’. 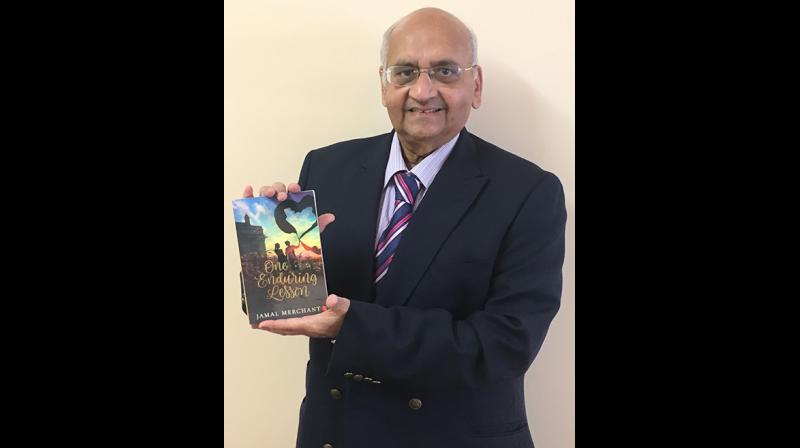 One Enduring Lesson is a tale of the undying fight for survival against all odds, wherein the protagonist explores his spiritual awakening.

Mumbai: London-based Jamal Merchant has launched his debut novel ‘One Enduring Lesson’. A property finance broker by profession, Jamal’s novel brings him back to his Indian roots as he traveled Mumbai and Amritsar extensively, to recreate a captivating journey in his novel.

The title of the novel has been taken from the last paragraph of ‘The Memoirs of Aga Khan’ wherein the late His Highness Aga Khan III wrote - “Life in the ultimate analysis has taught me one enduring lesson. The subject should always disappear in the object.”

This inspiring line is a glimpse into eight years of hard work put in by the author Jamal Merchant to trace the story of the protagonist Rahul Saxena, a British man with a half-Indian heritage.

After failing in love and quitting his job, Rahul winds up in Mumbai to learn filmmaking with hands-on training in the largest film industry in the world - Bollywood. His journey pushes him on a shady path as he comes across various facets of life in Mumbai.

For his survival, he has to do odd jobs - from a professional rat killer to providing pleasure to Mumbai’s rich women.

When his newfound love is threatened by his secret life as an escort, Rahul seeks the peace of spirituality to fight his internal and external demons in his quest to write his own destiny.

Speaking about his debut endeavour, author Jamal Merchant says, “The evolution of the original idea which struck me in 2009 into a critically acclaimed novel, occurred through a slow and painful process which took 8 years of perseverance. This is my debut novel, so I had to self-tuition myself in the art of storytelling, scene construction, dialogue development and creative writing- on which I attended a few short courses in London.”

He further adds, “I invested my time extensively in reading and watching movies. I also had to learn many aspects of life in India, for which I undertook a journey in January 2011 to visit Mumbai and Amritsar, two cities where the action takes place involving the protagonist Rahul Saxena. I used to get up at 4am to write. Completing my first draft in September 2011, I further enriched it with dozens of improvements and new ideas, culminating in a draft which was finally accepted and published in 2017."

One Enduring Lesson is a tale of the undying fight for survival against all odds, wherein the protagonist explores his spiritual awakening.