Kumble had to step down from the position just after a year following a fallout with Kohli. 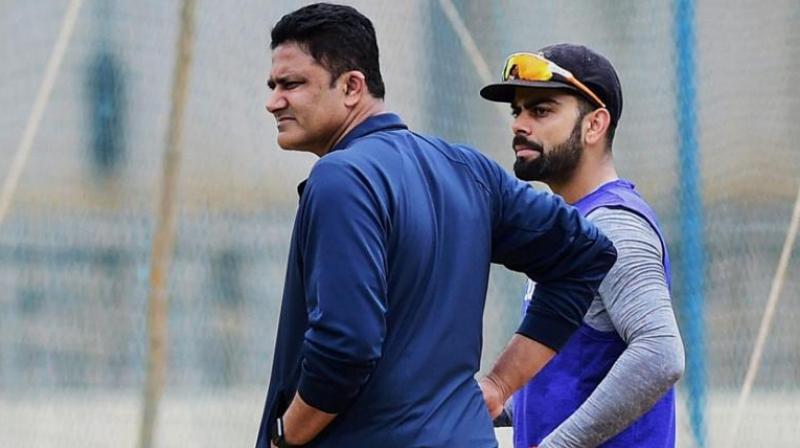 After a bitter fallout, Virat Kohli and Anil Kumble seem to have decided to move on from whatever has happened in the past as Kumble, along with his wife Chetna, attended Virat and Anushka’s Mumbai wedding reception. (Photo: AFP)

Mumbai: After a dream wedding in Italy and a grand wedding reception in New Delhi, Virat Kohli and Anushka Sharma hosted another wedding reception at the St Regis hotel in Mumbai on Tuesday. While the Bollywood bigwigs and star Indian cricketers graced the occasion, what took everyone by surprise was the presence of former India skipper and head coach Anil Kumble at the reception.

While India enjoyed tremendous on-field success under Kumble – the coach, he had to step down from the position just after a year following a fallout with Kohli.

Kumble, under whom India won the bilateral series against West Indies, England, Australia, New Zealand, Bangladesh and reached the final of the ICC Champions Trophy 2017 – where they eventually ended runners-up to arch-rivals Pakistan, had resigned from his role as coach saying that his and Kohli’s has become a “untenable partnership”.

Kumble, in a statement which he issued on Twitter, had said “Post this intimation, I was informed for the first time yesterday by the BCCI that the Captain had reservations with my ‘style’ and about my continuing as the Head Coach. I was surprised since I had always respected the role boundaries between Captain and Coach. Though the BCCI attempted to resolve the misunderstandings between the Captain and me, it was apparent that the partnership was untenable, and I therefore, believe it is best for me to move on”.

However, it seemed both Kohli and Kumble have decided to move on from whatever has happened in the past as Kumble, along with his wife Chetna, attended Virat and Anushka’s Mumbai wedding reception.

Not just that, it is also reported that Kumble was seem speaking with current India coach Ravi Shastri, who took over the reins from the former leg-spinner.

After the images of Kumble attending Virat-Anushka's Mumbai reception, Twitter had a field day.

so much has happened throughout that champions trophy that maybe shouldn’t have happened but nevertheless, great to see Kohli has invited Kumble to this great occasion #VirushkaReception

Anil Kumble attending Kohli's reception party! Unexpected, but it would be a great news if they have sorted out their tiff! #Virushka