The helmets are powered by rechargeable battery and the air-conditioning lasts from two to eight hours, depending on the battery capacity. 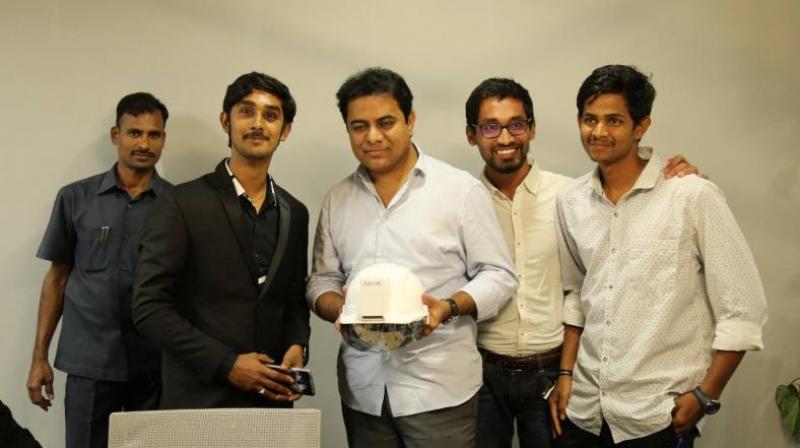 Set up by a team of engineering graduates, Jarsh designed the helmet in September 2016. (Facebook Screengrab/ Jarsh Innovations)

Hyderabad: With the advent of summer, people toiling at construction sites, cement and steel factories and other outdoor workplaces face the brunt of simmering heat.

Keeping in view the difficulties these workers undergo, a Hyderabad-based company has come up with air-conditioned helmets.

Set up by a team of engineering graduates, Jarsh designed the helmet in September 2016.

The air-conditioned helmets will help keep the boiling sun at bay for workers at construction sites.

What is the speciality of this air-conditioned helmet:

Jarsh Company’s helmet is powered by a rechargeable battery, and the air-conditioning lasts from two hours to eight hours, depending on the battery capacity.

What makes the helmet more user-friendly is that it can be recharged like a mobile phone.

Besides being comfortable to wear, the helmet is durable and more importantly, using this helmet will not result in any hair loss, Jarsh's company has claimed.

Over 85 per cent of the components are used from the local market.

After developing 40 prototypes, the company distributed the helmets to the Eastern Naval Command and a few companies to test them.

“Based on the feedback, a few minor changes were made in the design and now we are gearing up to manufacture nearly 3,000 helmets this summer at our Medchal unit," said Kausthub Kaundinya, Chief Executive Officer, Jarsh.

It weighs 250 grams heavier than the conventional ones.

"The helmets are ideal for people working in cement, steel and construction sites and not meant for two-wheelers. The idea is to help workers stay cool and shortly a few helmets will be distributed to the City Traffic Police personnel too, said Kausthub Kaundinya.

The Telangana government, especially RICH (Research and Innovation Circle of Hyderabad), has helped us a lot in obtaining the certifications, connections and approvals from the Indian Medical Council etc, Kaundinya added.

The Telangana government recently announced the setting up of information Technology campus for persons with disabilities, claiming this will be the world’s first such faculty.