The latest video which has gone viral on social media will bring a smile on people's face. 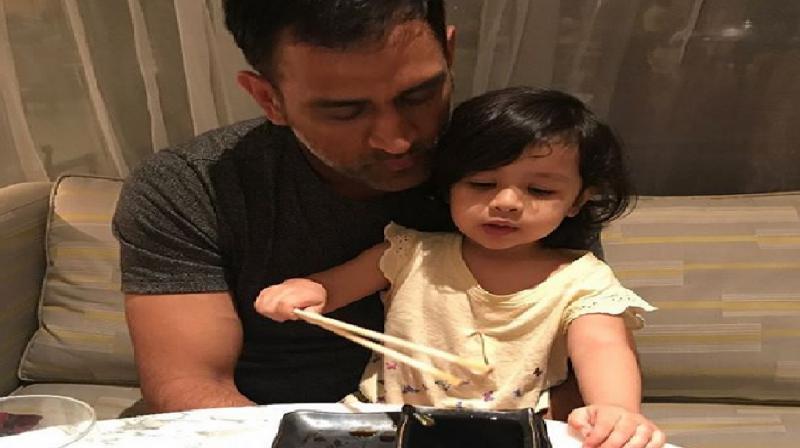 Since, his retirement from Test cricket, MS Dhoni could be seen spending more time with Ziva, whenever he is not playing cricket. (Photo: Instagram)

Mumbai: Team India ended their 2017 campaign in style, beating Sri Lanka in the ODI and T20 series in the absence of Virat Kohli, who took a break to marry Bollywood actress Anushka Sharma.

The wicket-keeper batsman was a part of the Indian team that defeated Sri Lanka in ODIs and T20Is. Rohit Sharma who captained the side in absence of Virat Kohli lead India to 2-1 win in ODIs and followed it by a 3-0 whitewash in T20Is.

After finishing the ODI and T20 series against Sri Lanka MS Dhoni is back home spending time with daughter Ziva.

In the latest video that has gone viral on social media, Ziva can be heard singing 'We wish you a Merry Christmas' while Dhoni is looking at her with all the love.

Since, his retirement from Test cricket, Dhoni could be seen spending more time with Ziva, whenever he is not playing cricket.

Coming back to India’s performance under Kohli in 2017, the team could not defend their ICC Champions Trophy title after losing the final against Pakistan. However, the team came roaring back by beating Sri Lanka in their own den and inflicting a clean sweep across all format on that tour after beating West Indies in their backyard. Before the ICC Champions Trophy kicked off, India enjoyed success against Australia and New Zealand at home.

India will begin 2018 with the tour to South Africa where they will play three Tests, six ODIs and three T20Is. Dhoni will join the side for the limited-overs leg of the tour.