Mahinder Pal Singh is the first Sikh cricketer to be selected in Pakistan's National Cricket Academy. 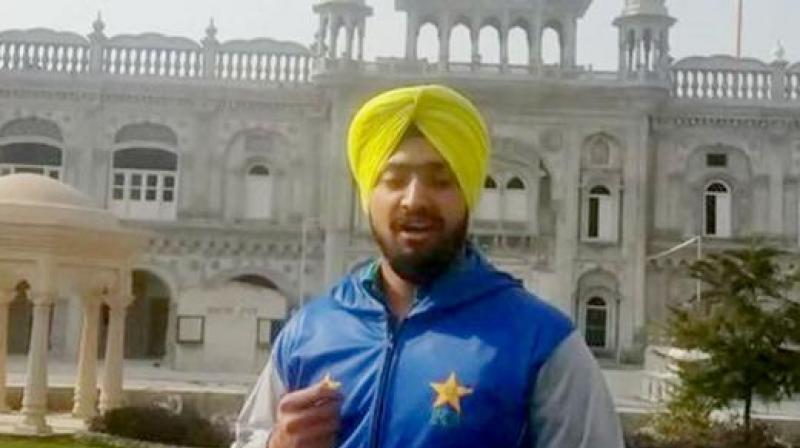 The 21-year old Mahinder was selected at an emerging player camp, organised by PCB in Multan in November. (Photo: Twitter)

The 21-year old Mahinder was selected at an emerging player camp, organised by PCB in Multan in November.

"It was a proud moment for me to be selected for the camp," Pal, who hails from the tribal region of Pakistan but lives in Nankana Sahib outside Lahore, told PTI.

The eldest among five siblings, Pal is the first member of his community to be recognised at this level.

"It was a great experience training with the other young pace talents in the country and we learnt a lot. But my aim now is to eventually play first class cricket," Pal, is a student of Pharmacy in Punjab University, said.

"I always loved playing cricket and I used to play for local clubs after completing my matriculation and I also worked at a academy in Mughulpura, Lahore," he said.

Pal's father, who himself is a ardent cricket lover and is a fast bowler, migrated with his family from Khyber Agency to Nankana Sahib about 15 years ago.

"He wanted to play competitive cricket but couldn't do so because he had to take care of the family and set up a business in Nankana Sahib. But he has now passed on his dream to me.

"It would be lovely to become the first Sikh in Pakistan to play for the national team but right now my dream is to first play first class cricket and showcase my talent. I am learning everyday as there is so much cricket shown on television nowadays," he said.

"There is lot of cricket talent in Nankana Sahib but we don't have proper playgrounds there and we used to go and play the Gurdwara's yard," added Pal, who idolises Shoaib Akhtar, Wasim Akram and Waqar Younis.

Asked if he had faced any bias or problems playing cricket in Pakistan because of his religion, Pal said: "Nope!

Wherever I play or when we were in the camp in Multan they only looked at my talent and performances. They made me work hard on my fitness."

Citing the example of Danish Kaneria, who played as a premier bowler for Pakistan at the highest level, Pal said if being a Hindu Kaneria could represent the country, why can't he achieve his dreams of playing at the top level.

When Shaharyar Khan visited the high performance centre in Multan to officially inaugurate it, Pal recollected that the PCB chief specially spent time with him and encouraged him.

"That encouragement will spur me to do better," he concluded."