Amnesty International's Andrew Gardner said the case was "a completely baseless prosecution that doesn't have a shred of evidence". 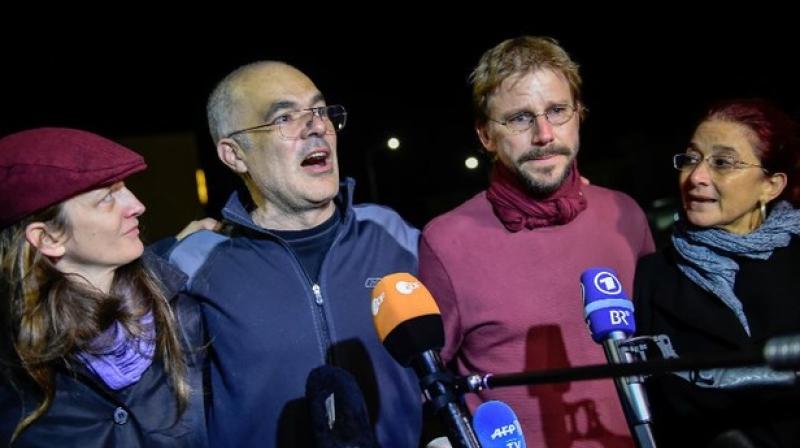 Activist Peter Steudtner (2nd R) of Germany and Ali Gharavi (2nd L) of Sweden talk to the media after their release from Silivri prison in Istanbul on October 26, 2017. (Photo: AFP)

Eight human rights activists, including Amnesty International's Turkey director Idil Eser, were greeted by celebrating relatives and supporters as they were released from jail near Istanbul early Thursday, October 26.

A court late Wednesday, October 25, ordered the release of the 8, including two foreigners, who are among 11 activists on trial over contested terror charges.

A crowd of supporters gathered overnight outside the Silivri prison, with some dancing for joy and others unfurling banners saying "Free human rights defenders."

"I think we're all more than relieved. We feel really happy about what happened. To speak of me, I am really grateful and we are really grateful for everybody who supported us legally, diplomatically and for solidarity," he said tearfully.

Steudtner's detention had stoked tensions with Berlin, and German Foreign Minister Sigmar Gabriel had described the terror charges as "incomprehensible".

Swedish colleague Ali Gharavi said: "We're a big family now, thank you everyone. Wherever you are, however you did it, you got us out, thank you very much."

Speaking after her release, Eser said she found the court verdict "very surprising".

"There are still a lot of friends, journalists who are in jail unfairly. We will continue to work until all human rights defenders and journalists are set free," she said.

The eight were among 11 activists who went on trial in Istanbul Wednesday in a case which Amnesty sees as a test for the Turkish judiciary.

While releasing eight of them who had been held in detention, the court ordered that Amnesty's Turkey chair Taner Kilic remain in jail, an Agence France-Presse correspondent at the court said.

All bar two of the activists had been behind bars since a police raid in July on a workshop run by Amnesty on an island off Istanbul.

The two foreigners are free to leave the country, a defense lawyer told Agence France-Presse.

Kilic was detained in June and his case was merged with that of the other 10 activists as prosecutors claimed he was aware of preparations for the workshop.

He will also appear at a hearing on Thursday in Izmir, western Turkey, on a separate charge of being a member of the organization accused of launching last year's failed coup.

Amnesty International secretary general Salil Shetty said the rights group could "finally celebrate friends and colleagues" returning to loved ones and their homes, but "any joy is tainted by the ongoing detention" of Kilic.

The activists are accused of seeking to wreak "chaos in society" – a similar charge to the one brought against anti-government protesters whose demonstrations rocked Turkey in the summer of 2013.

Eser said she rejected all the accusations.

"Defending human rights is not a crime. It is out of the question for Amnesty International to set an agenda in line with terror groups," she told the court.

Eser said Amnesty defended individuals' rights irrespective of their political views, showing as an example the group's support for President Recep Tayyip Erdogan when he was jailed for reciting a poem in 1998.

Ozlem Dalkiran, of Citizens' Assembly, said she read the indictment many times but "as a human rights defender I barely understand how a workshop ends up being linked to aiding an armed terror group."

The charges amplified concerns over freedom of expression in Turkey under the state of emergency imposed after last year's failed coup.

Ankara blamed the coup attempt on the self-exiled Muslim preacher Fethullah Gulen, who denies the accusations.

Erdogan in July said the activists were detained after a tip-off that they were working against the government.

Amnesty International's Turkey researcher Andrew Gardner said the case against the human rights defenders was "a completely baseless prosecution that doesn't have a shred of evidence and doesn't stand up to the slightest scrutiny".

"The case will be a test case for Turkey's judiciary," he told Agence France-Presse.

The activists are accused of links to outlawed groups including the Kurdistan Workers' Party (PKK), Gulen's organization and the far-left Revolutionary People's Liberation Party-Front (DHKP-C).