The feat acheived by both the participants marks the Indian arrival on the endurance cycling scene globally. 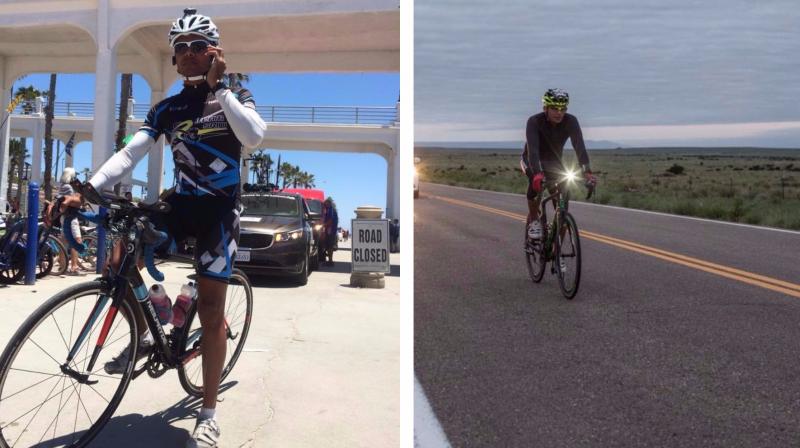 Mumbai: Eleven days, 18 hours and 45minutes after setting out from California, Srinivas Gokulnath created history by becoming the first Indian to complete what is considered to be the toughest cycle race in the world -- the 4,900-km Race Across America (RAAM) in solo category.

In a feat that marks the Indian arrival on the endurance cycling scene globally, another Maharashtrian, Dr Amit Samarth of Nagpur, followed him at the finish line at Annapolis on American east coast around midnight today as per the Indian time. Among the nine men who finished, Gokulnath stood 7th while Samarth was right on his heels at number 8. The race was won by Christoph Strasser. Team Sahyadri Cyclists, from Gokulnath's hometown of Nashik, completed the race in the 4-men category in eight days and 10 hrs today.

Unlike a stage race like the famed Tour de France, the clock is constantly ticking at RAAM, and the riders have to pedal over 400 km a day to finish the race in the stipulated 12 days.

They can rest for only a couple of hours a day at best; extreme fatigue, sleeplessness and hallucinations are not uncommon. "I am relieved...that is the feeling I am going through right now," is all Lt Colonel Gokulnath could say at the finish line.

Starting from temperate climes on the Pacific Coast, the race enters the furnace-like Mojave Desert, passes through arid Arizona, cold mountain passes in Colorado, windy plains in central America, and finally the Appalachian Mountains test the riders before they reach the Atlantic coast on the east.

In its over three-decade history, only three Indians had attempted RAAM solo, but no one could finish. Samim Rizvi, the first Indian to attempt, also took part this year but couldn't finish. Gokulnath said he went through various emotions right from the start of the race, which he termed as a "relentless effort" from the moment one signs up for it.

Gokulnath, a doctor by training, is an aerospace medicine specialist working with the Army in Nashik, and was competing for the second consecutive year at RAAM (he was timed out last year after pedalling for nearly 3,000 km).

Samarth, however, finished the race in his maiden attempt. Apart from Rizvi and Gokulnath, Sumit Patil from Alibag was the only one to have attempted the race in the past.

More than a dozen Indian riders have qualified for RAAM during the past decade through special rides that take place in various regions like the Deccan plateau, the Thar desert and the hills of south India.

After qualifying, one has to undergo gruelling training for several months, do simulated multi-day rides with a specially collected crew, and also arrange the finances that run up to over Rs 20 lakh for the race and more for training.

Congratulating the finishers, Satish Patki, who virtually introduced distance cycling in the country over a decade ago, said the resources required make it an exclusive club, but there is a huge potential for endurance riding in India too which can be explored by having domestic races.

Mahendra and Hitendra Mahajan, doctors from Nashik, had won the two-men category last year, marking the first Indian finish at the RAAM, but a solo finish was elusive till Gokulnath crossed the line. Mahajan brothers returned to RAAM this year as crew members in Team Sahyadri.

Multi-disciplinary interests in endurance sports are almost like a given -- the Mahajan brothers are active distance runners while Samarth has done multiple Ironman triathlons and marathons.