The body of a man was found hanging from the ramparts of Jaipur's Nahargarh Fort. 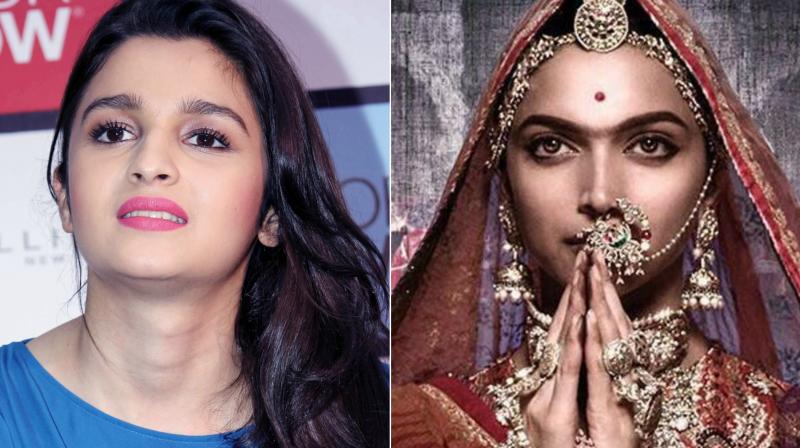 Mumbai: Actress Alia Bhatt on Friday expressed shock over the alleged murder of a man as a mark of protest against the film 'Padmavati' and said violent threats should be restrained.

Alia said, "This is what happens when violent threats are allowed to made openly without punishment."

The controvery over the release of Sanjay Leela Bhansali's magnum opus 'Padmavati' took an ugly turn today, after a man was found hanging from the ramparts of Jaipur's Nahargarh Fort.

The 24-year-old actress took to her Twitter handle and wrote, "This is what happens when violent threats are allowed to made openly without punishment! What is happening? Shocked!"

Filmmaker Madhur Bhandarkar on Friday also stated that attacks and threats like these were not in the right spirit, and demanded a thorough investigation into the matter.

"It's a very shocking news and I want a thorough investigation be done into this," Bhandarkar said.

"These acts are not right and we condemn these kind of attacks and threats to actors. I'm sure that state government will take proper cognisance of this," he added.

The incident was earlier speculated to be a suicide case, but when the police reached the spot, they found a message written on the rocks stating - "We do not only burn effigies, in protest of Padmavati".

The 72-year-old poet tweeted, "I sincerely hope that condemning those who offer five crore for some 's head and Ten crore for some one 's nose is yet not considered an anti national activity."

'Padmavati' has been in the eye of the storm following protests from conservative groups over alleged tampering with historical facts, a contention which filmmaker Sanjay Leela Bhansali has denied repeatedly.

The film features Padukone in the title role as Rani Padmavati, alongside Shahid Kapoor as Maharawal Ratan Singh and Singh as Sultan Alauddin Khilji.

The release of the film, which was earlier slated for December 1, was deferred as the filmmakers were yet to procure a censor certificate.