Belgium registered an all-time high of 39.9 degrees Celsius at the Kleine-Brogel military base, beating a record dating back to June 1947. 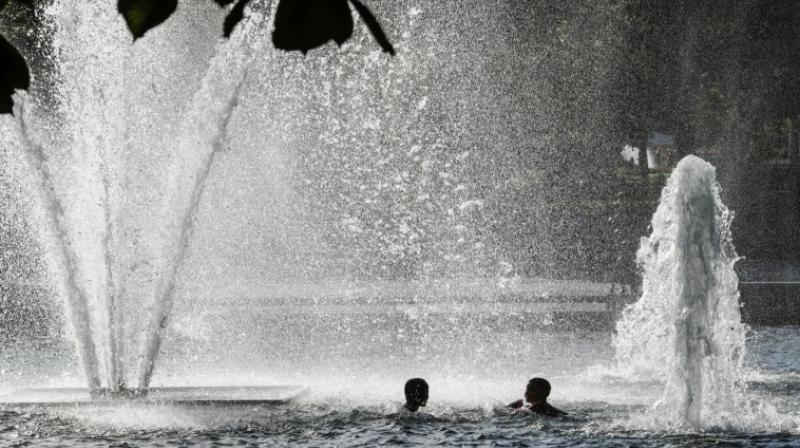 European heatwave soared towards its peak on Wednesday. (Photo: AFP)

Europe: Belgium, Germany and the Netherlands recorded their highest ever temperatures as a European heatwave soared towards its peak on Wednesday, impacting rail transport and prompting a number of drownings with people taking to the water.

Cyclists in the Tour de France in southern France had to puff their way over the course in well over 30 degrees Celsius while in the Netherlands, farmers have been leaving their cows outside to sleep, rather than bringing them in at night.

Belgium registered an all-time high of 39.9 degrees Celsius (104 Fahrenheit) at the Kleine-Brogel military base, beating a record that dated back to June 1947.

In the Netherlands, 38.8C at Gilze-Rijen, in the south, displaced a record dating back 75 years.

The second heatwave in less than a month has focused new attention on climate change and a host of French cities broke records on Tuesday. Wine capital Bordeaux hit 41.2 C (106.16 F) while the central city of Vichy climbed to 41.3 C (106.3 F).

Paris is facing its hottest day on Thursday with the French capital's 70-year-plus record of 40.4 C (104.7 F) forecast to fall. Cooler weather with rain was expected to provide relief from Friday.

"It's too much for us," said Sven Schenk, 29, a logistics worker from Germany who was visiting Paris. "We're not looking forward to tomorrow! But we haven't changed our plans."

Britain's Met Office predicted a chance that the UK temperature record of 38.5 C (101.3 F) which was recorded in Faversham, Kent, in August 2004, will also be exceeded on Thursday at the peak of the heat.

Britain's Network Rail said it was slowing down trains in response to the extreme weather.

French trains were also slowed down and the national rail operator SNCF advised travellers in the worst affected areas to delay journeys planned at the peak of the heatwave Thursday.

Thalys and Eurostar train services between Brussels, Paris and London were disrupted by a failure on an overhead power line, although it was not immediately clear if this was due to the heatwave.

A Eurostar train bound for London tore down part of the cable support just outside Brussels. The 600 passengers were eventually taken back to Brussels, the Belga news agency said.

Across the area affected by the unusually high heat, people tried to cool off in lakes and rivers.

In London, police were searching for three people who went missing in the River Thames while swimming while three people have drowned in Germany since Tuesday.

Dutch media said hundreds of pigs died when a ventilator failed at Middelharnis.

Paris in particular remains haunted by the early summer of 2003 when 15,000 deaths were blamed on the heat and the authorities were bitterly criticised for not mobilising fast enough.

"We need to take care of ourselves but above all others, especially those who are alone, and be able to detect the first symptoms of heatstroke," said Prime Minister Edouard Philippe.

Local authorities have placed restrictions on water usage in many areas due to drought-like conditions that have seen ground and river water levels fall dramatically.

This summer's second heatwave has amplified concerns in Europe that human activity is heating the planet at a dangerous rate.

The June 26-28 blast of heat in France was four degrees Celsius (7.2 Fahrenheit) hotter than an equally rare June heatwave would have been in 1900, the World Weather Attribution (WWA) team said this month.

One study by the Swiss Federal Institute of Technology said the deadly, weeks-long heatwave across northern Europe in 2018 would have been statistically impossible without climate change.

Swedish teenage climate activist Greta Thunberg, who has highlighted the problem of global warming through school strikes, warned MPs at France's parliament of dire consequences if "business as usual" continues until 2030.