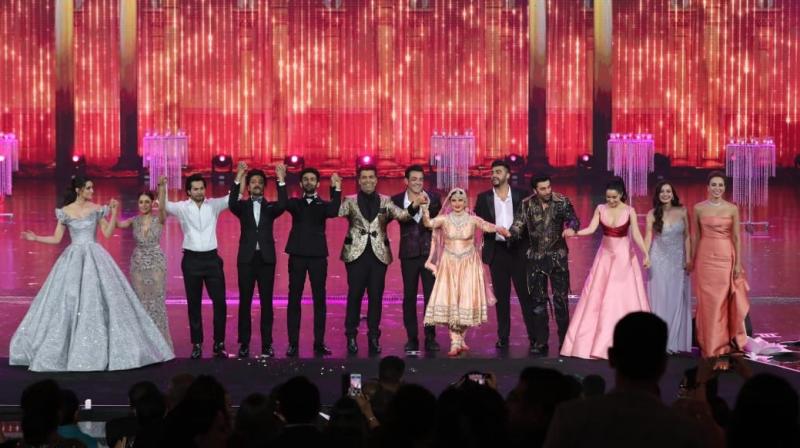 Bangkok: Veteran actor Rekha, in a rare public performance, and Ranbir Kapoor brought the curtains down at the IIFA Awards 2018 as they enthralled audiences with their riveting dance moves.

And it’s a wrap! #IIFA2018 has been a magical weekend with all our amazing stars. pic.twitter.com/XVbRczrGZG

Rekha, at 63, dressed in light pink anarkali, proved that age is just a number for her as she mesmerised the audiences with her performance on vintage tracks such as ‘Salaam-e-Ishq’ from ‘Muqaddar Ka Sikandar’, ‘Dil Cheez Kya Hai’ from ‘Umrao Jaan’ and ‘Pyaar Kiya To Darna Kya’ from ‘Mughal-e-Azam’.

Clad in soft gold and baby pink anarkali suit along with heavy jewellery, Rekha's performance received a standing ovation from the crowd. At the end of her 20-minute-long performance, Rekha walked away while thanking all with a 'namaste'.

The very evergreen #Rekha ji performed at the IIFA stage after 20 long years and we couldn't be more honoured to have her.#IIFA2018 pic.twitter.com/UllPd5JH22

The younger lot of Bollywood, that included Ranbir Kapoor, Varun Dhawan, Arjun Kapoor, Kartik Aaryan, Kriti Sanon and Nushrat Bharucha, descended on the stage to pay their tributes to the veteran star.

Ranbir, who is awaiting the release of his next ‘Sanju’, was the penultimate performer at the awards and the actor arrived in style to the tunes of his rock songs ‘Sadda Haq’ and ‘Bulleya’.

During his pulsating performance, he grooved on popular tracks of his own films including ‘Badtameez Dil’, ‘Besharam’, ‘Balam Pichkari’ and others.

It's amazing how #RanbirKapoor brings so much charm even to a rugged avatar! #IIFA2018 pic.twitter.com/OQoMWxqeIa

Ranbir's performance was preceded by that of Shraddha Kapoor, Kriti and Arjun.

Shraddha performed on a medley of tracks such as ‘Lagti Lahore Diya’, ‘Naah Naah Goriye’ and ‘Bom Diggy Diggy’, while Kriti and Arjun danced together on songs like ‘Raabta’, ‘Tune Maari Entriyaan’ and ‘Hawa Hawa’.

. @ShraddhaKapoor brought the heat to the IIFA stage with her sizzling performance #IIFA2018 pic.twitter.com/TdrS4HUnja

Varun was another star of the evening as he looked like a Jedi from Star Wars while dancing on ‘Badlapur’ track ‘Jee Karda’ with a prop sword that could be easily mistaken for a lightsaber.

He later turned the heat on, showing off his spectacular dancing skills on the tracks ‘Sau Tarah Ke’ from ‘Dishoom’, ‘Aa Toh Sahi’ from ‘Judwaa 2’ and ‘Tamma Tamma’ from ‘Badrinath Ki Dulhania’.

His energetic act came to an end with ‘Tan Tana Tan’ where he engaged in a dance-off with his exact duplicate on a screen.

Bobby Deol, who is coming fresh from the success of ‘Race 3’, took the audiences back to late nineties and early 2000s as he danced on hit songs from his films such as ‘Gupt’, ‘Barsaat’ and ‘Soldier’.

He was later joined by Iulia Vantur and the two then danced on ‘Race 3’ songs – ‘Selfish’ and ‘Party Chale On’.

. @thedeol and @IuliaVantur blew us away with their stunning act. Here's what we captured at #IIFA2018 pic.twitter.com/AFOpekqkRb

‘Sonu Ke Titu Ki Sweety’ star Kartik Aaryan was the first performer at the ceremony and he grooved on the songs of his film during his act.

Vidya Balan-starrer ‘Tumhari Sulu’ bagged the top prize of the evening as well as the best director while Irrfan Khan won the best actor for ‘Hindi Medium’. Sridevi was posthumously adjudged the best female actor for her performance in ‘Mom’ at the 19th edition of the IIFA Awards.