Coat of Arms for new Duchess of Sussex revealed

Markle worked closely with College of Arms throughout design process to create a Coat of Arms that was both personal and representative. 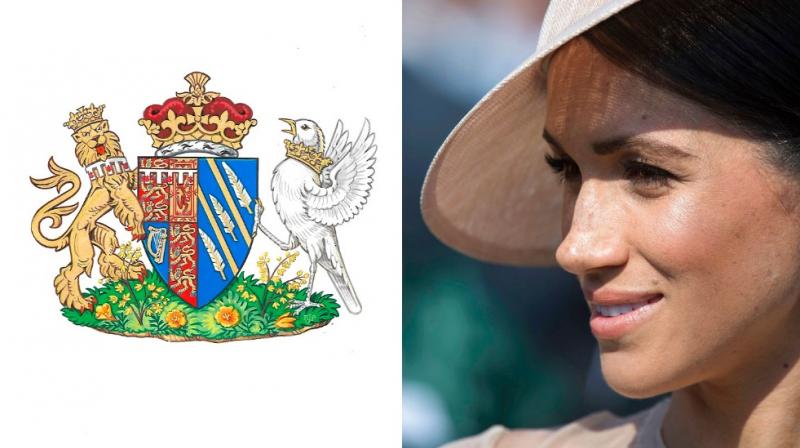 The Coat of Arms for the Duchess of Sussex, as she is now formally known, includes symbols that invoke the former actress' background and look to her future. (Photo: AP)

London: Kensington Palace has given details of the newly created Coat of Arms for the former Meghan Markle - an honor which is accorded by tradition to the nobility.

The Coat of Arms for the Duchess of Sussex, as she is now formally known, includes symbols that invoke the former actress' background and look to her future.

It features a blue background that represents the Pacific Ocean and golden rays of sunshine reminiscent of California, her home state in America. The shield includes three quills representing the power of words - a nod to her former website, which was used as a forum to discuss social issues.

A Coat of Arms has been created for The Duchess of Sussex: https://t.co/mJb3mqZfaZ pic.twitter.com/0EgbiS29Rb

A collection of golden poppies, California's state flower, sit on the grass beneath the shield together with wintersweet, which grows at Kensington Palace.

According to the royal website, Markle worked closely with the College of Arms throughout the design process to create a Coat of Arms that was both personal and representative.

The supporter relating to the Duchess of Sussex is a songbird with wings elevated as if flying and an open beak, which with the quill represents the power of communication.

A Coronet has also been assigned to The Duchess of Sussex. It is the Coronet laid down by a Royal Warrant of 1917 for the sons and daughters of the Heir Apparent. It is composed of two crosses patée, four fleurs-de-lys and two strawberry leaves.

The arms of a married woman are shown with those of her husband and the technical term is that they are impaled, meaning placed side by side in the same shield.

Speaking about it, Thomas Woodcock, Garter King of Arms said: "The Duchess of Sussex took a great interest in the design. Good heraldic design is nearly always simple and the Arms of The Duchess of Sussex stand well beside the historic beauty of the quartered British Royal Arms.”

He further added, “Heraldry as a means of identification has flourished in Europe for almost nine hundred years and is associated with both individual people and great corporate bodies such as Cities, Universities and for instance the Livery Companies in the City of London. "