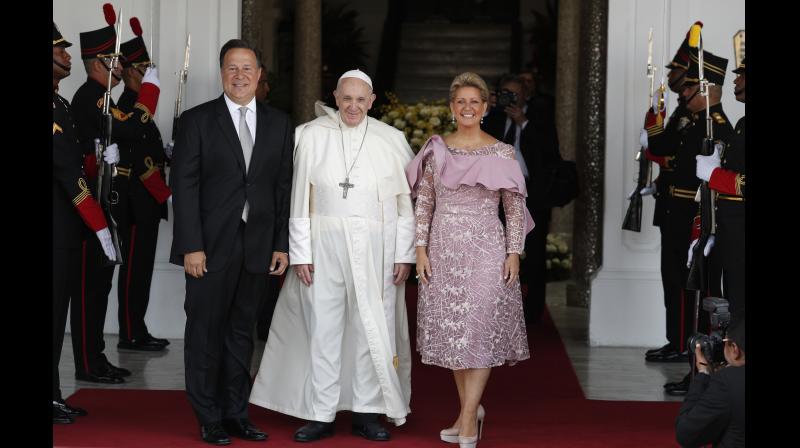 Panama City: Pope Francis insisted Thursday that public officials live simply, honestly and transparently as he opened a visit to Central America that has been rife with corruption scandals and is now coping with political upheaval in nearby Venezuela.

Francis didn't mention the Venezuela crisis during his first remarks in Panama after a meeting with President Juan Carlos Varela at the presidential palace. But his spokesman said he was following the situation closely, was praying for the Venezuelan people and supported "all efforts that help save the population from further suffering."

Francis stuck to his script in Panama, celebrating the country's location as the bridge between oceans and cultures and holding up the region's newest saint, slain Salvadoran Archbishop Oscar Romero, as a model for a humble church that accompanies the poor.

He welcomed tens of thousands of young people to World Youth Day, the Catholic Church's big youth rally, and urged them to be builders of bridges of encounter, not "builders of walls that sow fear and look to divide and box people in," a clear reference to the proposed US-Mexico border wall.

Francis' visit is taking place against the backdrop of both the turmoil in Venezuela and the ongoing migrant standoff in the United States, where the government is partly shut down over President Donald Trump's demand for congressional funding for a wall at the US-Mexico border.

History's first Latin American pope, who was born to Italian immigrants to Argentina, Pope Francis has made the plight of migrants a cornerstone of his papacy and denounced how fear of migrants was driving populist and nationalist sentiment across the globe.

Francis said that young people today have few opportunities and face dangerous, difficult challenges, citing "domestic violence, the killing of women - our continent is experiencing a plague in this regard - armed gangs and criminals, drug trafficking, the sexual exploitation of minors and young people, and so on."

Francis has frequently urged young people to resist easy temptations of drug dealing and gang membership, and to especially avoid the lure of corruption. It is a message that will likely resonate with the youth of the region.