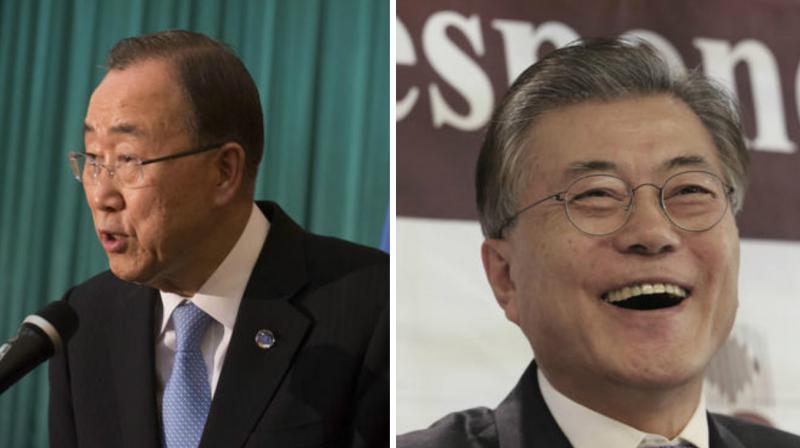 Seoul: As hundreds of thousands of South Koreans poured into the streets every weekend for two months to call for President Park Geun-hye to resign, the opposition's leading contender to replace her appeared reluctant to seize the moment.

That is changing as Moon Jae-in, a 63-year-old human rights lawyer who lost the 2012 election to Park by more than a million votes, has in recent days taken a higher public profile as he seeks to lead the liberal Democratic Party into the next election and end eight years of conservative rule.

Like many on the left, he calls for sweeping reform of the chaebol, the big conglomerates that dominate the economy and have been at the heart of the current political crisis calling them a "source of unfairness" in South Korea.

He promises to move the presidential office into a multi-purpose government building and turn the palace-like Blue House, where Park remains while a court decides her fate after she was impeached by parliament, into a public museum.

He has also said that, if elected, he would visit rival North Korea before making a trip to South Korea's main ally, the United States. Just two North-South summits have been held since the 1950-53 Korean war that divided the peninsula.

"The people who are angry in Korea want regime change, and the most realistic option and most probable person to do that is Moon Jae-in," Yang Jung-chul, a close aide to Moon, told Reuters.

Moon had led opinion polls in recent weeks, although a survey released on Thursday by Realmeter showed he had fallen just behind United Nations Secretary-General Ban Ki-moon, by 23.1 percent to 22.2 percent.

Ban has yet to declare his candidacy or party affiliation, but has been expected to join a conservative grouping.

Moon's popularity among liberals stems from his time as chief of staff to South Korea's last liberal president, Roh Moo-hyun, a figure revered by the left for his experimental and anti-establishment politics that sought chaebol reform.

"Moon is a symbol of that experiment," said Yang.

But Roh, derided by conservatives for his pursuit of engagement with North Korea that they say failed to change Pyongyang's behaviour, could also be Moon's undoing, especially among South Korea's elderly.

The majority of people aged over 60, most of whom are conservative, have turned out to vote in the last three presidential elections, according to National Election Commission data. In 2012, 85.9 percent of over-60s voted.

By contrast, the least-avid voting group is people in their 20s or 30s, many of whom took to the streets for the first time during recent candle-lit protests in Seoul. At the last election their turnout levels were below 65 percent.

That was high, by recent standards, for the demographic, but Moon will need to convince an even bigger share of them to turn out and vote for him in the upcoming election, which is no sure thing.

"He has a tendency to make ambiguous comments and be overly-cautious of crossing lines," said Moon Ji-hyun, a student activist at Sungkyunkwan University in Seoul. "He wasn't in the frontlines at the early stages of the protests."

The Constitutional Court must decide whether to uphold parliament's Dec. 9 motion to impeach Park, which could take up to 180 days and, if successful, trigger an election two months later.

Moon's parents fled North Korea during the Korean War and resettled in Busan, at the south of the peninsula, where Moon grew up in a shanty town.

He was jailed in 1975 for protesting against the dictatorship of Park Chung Hee, President Park's father, whose rule lasted 18 years. After leaving mandatory military service, where he served in the special forces, Moon became a lawyer.

As leader of the opposition last year, Moon adopted a more centrist stance to win over sceptics. But just 8 percent of those polled at the time said they thought Moon's party was best on economic issues, compared with 44 percent for the ruling Saenuri Party.

"To win undecided voters, Moon needs to address security, diplomacy and unification, where many are distrustful of him," said Lee Chung-hee, a politics professor at Hankuk University of Foreign Studies in Seoul.

Moon came under fire earlier this year for revelations in a former foreign minister's memoir that he had backed a motion to abstain from a United Nations vote against North Korea's human rights record.

While Moon leads the race to represent his party in the election, new stars have risen.

One is Lee Jae-myung, the mayor of Seongnam, just south of Seoul, who has gone from rank outsider to third place in polls, riding the crisis with populist speeches.

By contrast, Moon's caution and deliberate speaking style has earned him the nickname "sweet potato" slow to cook, slow to eat, and a little difficult to swallow. Lee, meanwhile, has been dubbed "soda" for his refreshing new take on politics.

In a recent radio interview, Moon said the Seongnam mayor was indeed like soda - refreshing but, unlike his own nickname, lacking substance.