The American comedian was lauded for her courage and efforts for LGBTQ rights. 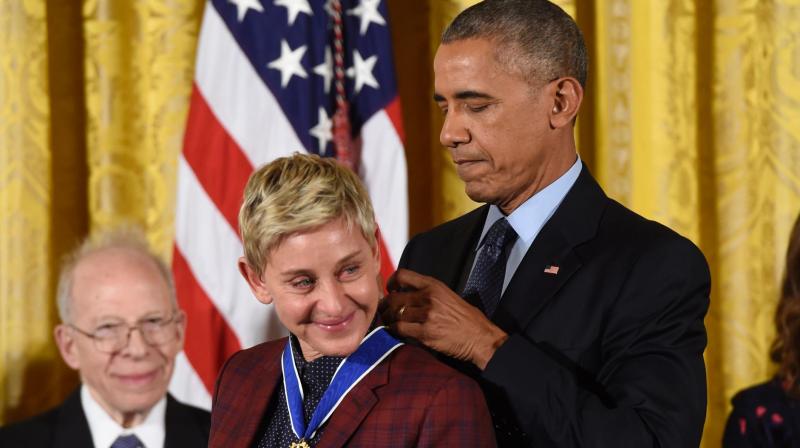 21 others including Robert De Niro and Tom hanks were also honoured (Photo: AP)

Washington: Known for her work towards LGBTQ rights and social justice, American comedian Ellen DeGeneres among the most influential pop culture personalities globally, as she has hosted an array of celebrities from Priyanka Chopra to US President Barack Obama on her show.

Ellen’s consistent efforts over the years to entertain people and raise awareness by coming out about her sexuality almost 20-years-ago have fetched her the highest civilian honour in the US, awarded by President Obama himself.

After a career spanning three decades, Ellen received the Presidential Medal of Freedom, alongside 21 others including Robert De Niro and Tom Hanks, in an emotional ceremony at the White House.

President Barrack Obama was overcome by emotions and choked up while giving the award as he praised Ellen’s contribution towards gay rights and her courage to come out, he said, "What an incredible burden that was to bear - to risk your career like that - people don't do that very often. And then, to have the hopes of millions on your shoulders."

Ellen DeGeneres, who almost missed the event due to security’s refusal to let her in the White House  without her ID, was also visibly emotional while receiving the award.