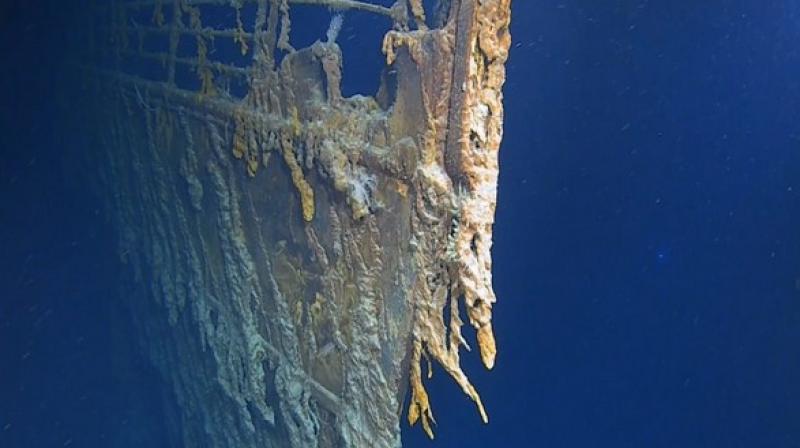 Interestingly, the 4K video will make it possible to watch the wreck in augmented and virtual reality technology. (Photo: Atlantica Production)

Washington: The Royal Merchant Ship Titanic is now in the process of being swallowed up by metal-eating bacteria in the sea, divers found when they visited the site for the first time in 14 years.

The ship which was deemed "unsinkable" was inspected five times in August by an exploration team from Triton Submarines to the spot 370 miles south of Newfoundland, Canada, and 4,000 meters below the surface, said a release from Triton, a civil submarine producer.

The divers of the project will be publishing the full results alongside a documentary film being made by Atlantic Productions London.

The footage of the 107-year-old wreck was captured through specially adapted cameras which were being handled by a team of experts, scientists and a National Ocean and Atmospheric Administration.

Interestingly, the 4K video will make it possible to watch the wreck in augmented and virtual reality technology.

The video showed the impact that salt corrosion, metal-eating bacteria, and the deep current action is having on Titanic.

"The most fascinating aspect was seeing how the Titanic is being consumed by the ocean and returning to its elemental form while providing refuge for a remarkably diverse number of animals," said Patrick Lahey, the president and co-founder of Triton Submarines.

Victor Vescovo, CEO of Caladan Oceanic and the submersible's chief pilot, noted that the achievement of this series of dives to the Titanic has opened doors to reach other difficult to visit wrecks using a similar process.

"We now have a proven system that can easily and repeatedly visit an ocean wreck, at any depth, anywhere in the world, and study it in detail. We're seriously thinking about where to take her next," Vescovo said.