The designer's Armani collection for next spring and summer bursts with florals and color, often on a background of black. 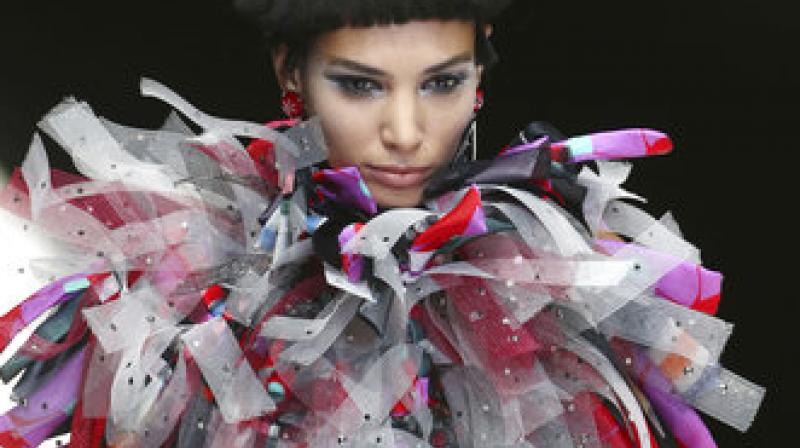 Milan: The fashion crowd eased into the day Friday, the third day of Milan Fashion Week, after a late night raising money for AIDS research at the annual amfAR Milan gala.

The amfAR foundation honored Angela Missoni for her contributions to the cause at the Thursday night gala, with tenor Andrea Bocelli entertaining the crowd with Elvis Presley's "Can't Help Falling in Love With You" in a duet with his wife Veronica Berti. Bocelli also participated in the auction to raise funds for research, and will host two winning bidders and their guests at a concert and private dinner in Tuscany.

The price tag for each package: 35,000 euros, toward amfAR's goal of a cure for AIDS by 2020. Champagne flowed into the wee hours with after-party music by DJs Dimitri From Paris and Johnny Dynell. Here are some highlights from Friday's womenswear looks for next spring and summer, featuring Giorgio Armani, Versace and Roberto Cavalli.

When the times go dark, Giorgio Armani goes bright. The 83-year-old designer's Armani collection for next spring and summer bursts with florals and color, often on a background of black. The silhouette is loose and feminine, with short skirts featuring leg-revealing tulip hemlines, sheer organza pantsuits with an easy cut and casual apron dress with abstract florals.

The designer often layered florals and prints over dark underlays - perhaps a message to see the brighter side of things. At other times he placed a sheer layer over prints, creating a smoky effect. Silken printed skirts opened over a black dress, or a long, draping foulard tucked across the front of a cocktail dress. The prints were inspired by painters, the designer won't say whom. "I respond to sadness with color," ANSA quoted the designer as saying.

The primary color combinations for daywear are red and purple with black accents, segueing into grays for formal suits and black for evening. Despite the designer's intentions, long black veils over cocktail dresses had a funereal feel, and somehow the pompoms bouncing on scarves and bedecking caps failed to provide levity. The prevalent bangle shape: Teardrops.

THE LIGHTNESS OF CATE

Cate Blanchett looked relaxed in a red-and-white checked double-breasted Armani suit as she arrived to take her front row seat alongside Formula 1 driver Lewis Hamilton and Princess Charlene of Monaco. "It's a beautiful sunny day, so I am wearing something light," Blanchett said. "I cannot wait to see the show." Asked about the industry's moves toward sustainability, championed by the Italian Fashion Chamber ,Blanchett responded: "It's the only way forward."