Virgil Abloh, the first African-American to head a major European fashion house, drew stars to Paris for his rainbow-themed show. 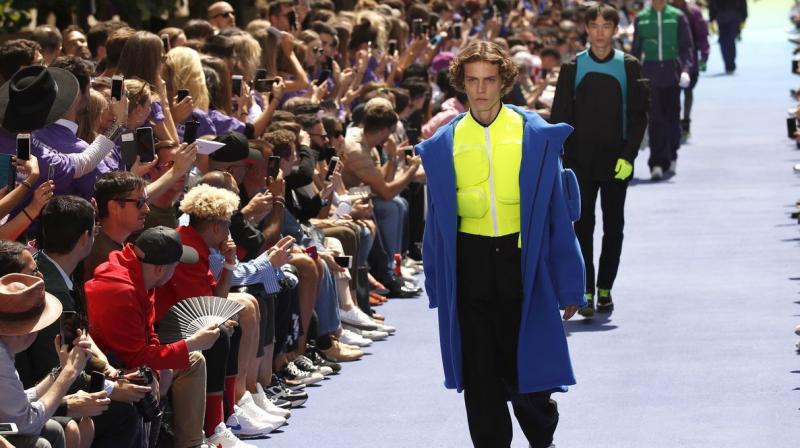 It was clear by the mood at the show that expectations for artistic director Abloh’s debut were at stratospheric levels. (Photo: AP)

The debut Louis Vuitton collection by Virgil Abloh, the first African-American to head a major European fashion house, drew stars of all stripes to Paris for his rainbow-themed menswear show.

Kanye West was there with his wife, Kim Kardashian West, who had returned to Paris for the first time since she was tied up and robbed at gunpoint during an October 2016 jewelry heist. Model Bella Hadid weathered a prevailing hot spell behind shades, while Rihanna and Naomi Campbell arrived for the big event of Paris Fashion Week at the last minute.

Here are some highlights from Thursday’s spring-summer menswear shows:

“It is a big, big day,” Bella Hadid said as she took her seat in the yellow section of Louis Vuitton’s multicolored set.

It was clear by the mood at the show that expectations for artistic director Abloh’s debut were at stratospheric levels.

And Abloh did not squander his moment. There was deep and thoughtful symbolism throughout the 56 multicolored looks.

On Thursday, it was the base color for sheer T-shirts, LV fitted jackets and loose pleated pants that were accessorized with broken white chains that hung from bags and dragged on the floor. All of the models displaying the garments were black.

A fluorescent yellow breast-plate top began a leitmotif of cage-like garments, such as orange ribbed vests and fluorescent side bibs.

Abloh literally went over the rainbow for the show’s best looks, which channeled “The Wizard of Oz.” A black and white jacquard double-breasted tailored jacket had an image of Judy Garland on the back.

Abloh’s Louis Vuitton debut was recognized as a history-making moment for fashion.

American football player Victor Cruz, 31, who has African-American and Puerto Rican roots, told The Associated Press: “I’m happy to be alive and be part of this, because this hasn’t happened before in my generation.”

Cruz, who arrived with Hadid, said having an African-American designer leading a European heritage house for the first time was “opening the door. People now have to pay attention to minorities and the culture that we are shaping for ourselves.”

“This forces them to pay attention to us now,” he continued. “Pay attention in a real way, and not just inviting us to their shows. There are more doors opening to us now.”

“Confusion” and age-old drama reigned in the styles of Rick Owens’ spring-summer ode to the Tower of Babel.

Set outside against the art deco columns of Paris’ Palais de Tokyo, his show featured machines spitting mood-setting smoke out across the constructed geometric stage. The accomplished designs themselves followed this architectural theme.

Crisscross patterns — as seen in a torn vest silhouette or in a graphic print — were ubiquitous on looks that often capped gargantuan, 90s-era black pants.

Much like the Biblical tower that Owens’ used as a touchstone for the 40 looks, the weight of the silhouette seemed visually to carry down from the torso to solid legs.

The pants, which were sometimes adorned with studs or imagined in geometric panels, were highly artistic in their play on proportion.

THE ART OF THE INVITATION

The age of email doesn’t seem to have left a mark on the fashion industry’s antiquated system for extending invitations.

Top houses vie to see which will come up the funniest or most imaginative one.

The invitation to Rick Owens’ menswear show on Thursday arrived in the shape of a black cotton mouth mask that fastened around the ears.

The Yoshiokubo label sent out an invite to its “Bank Robbery” show that was fashioned as a thick wad of pretend $500,000 bills.

Loose summer vibes were in the breeze at the open-air Issey Miyake presentation.

Flowing silhouettes of cotton jersey — hybrids between T-shirts and shirts — led the eye to baggy printed pants inspired by sunlight.

The sun theme continued in woven jackets. The zigzag patterns that evoked summer rays were made using a computerized jacquard fabric.

It was a reminder why Issey Miyake is known as the house of techno-fabrics.

Some jackets looked businesslike or preppy — a fitting reference for the show venue, Paris’ Sorbonne university.

“The boundaries between work, leisure, privacy have become blurred. One can work everywhere. A park, a cafe, a library or at home,” the show notes pointed out.

This fact was certainly not lost on the myriad fashion writers, bunched up after the show with coffees, working to meet deadlines.