Vinod Rai, chairman of the CoA, said that they are extremely proud of the way team have conducted themselves in the series. 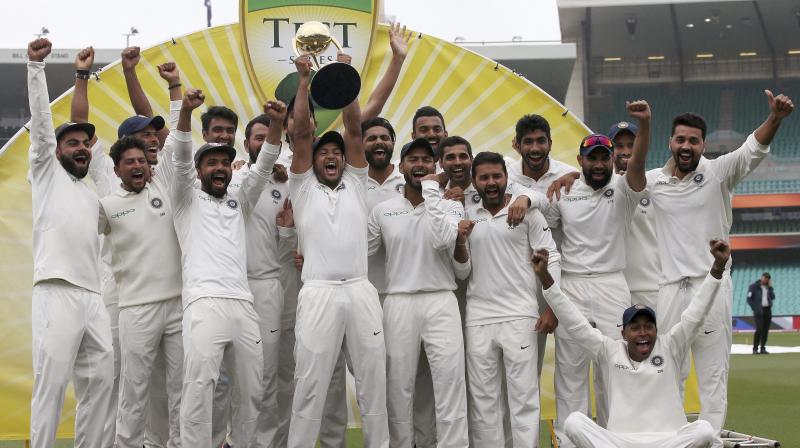 Earlier, BCCI had announced cash rewards for the Indian team as well when they had registered a historic 2-1 Test series victory over Australia. (Photo: AP)

Mumbai: The Board of Control for Cricket in India (BCCI) on Tuesday announced cash rewards for the selectors following the team’s successful tour to Australia where they clinched a historic Test series win along with winning their first-ever bilateral ODI series as well.

“It has been decided that the selection committee comprising five members will get a bonus of Rs 20 lakh each,” BCCI said in a statement.

Vinod Rai, chairman of the Committee of Administrators (CoA), said that they are extremely proud of the way team have conducted themselves in the series. He further acknowledged the crucial contribution made by the selectors “in picking a balanced Indian squad” and offering team management with enough options to try different combinations.

"We are extremely proud of the way Team India have performed in Australia. We had announced cash rewards for cricketers and support staff earlier and are now rewarding the selectors," Rai said.

"The five men have played a crucial role in picking a balanced Indian squad and offering the team management enough options to work around different combinations. The boys chose to represent the Indian team and went about their task in a fearless manner and stood up in challenging situations," he added.

CoA member Diana Edulji also appreciated the Indian team for their performance while adding that a three-match ODI series against Australia provided excellent preparation for the team. She further congratulated all the young players like Mayank Agarwal and Hanuma Vihari who “performed brilliantly” on their maiden tour to Australia.

"Each member who has played a role in India’s recent triumphs in Australia needs to be appreciated. With the ICC Cricket World Cup just about four months away, the three-match ODI series in Australia provided excellent preparation for the Indian team," Edulji said.

"The selectors have been focusing on a core group of cricketers that will make the cut at the showpiece event. I congratulate them for picking some fine young talents, who performed brilliantly on their maiden tour of Australia," she added.

Earlier, BCCI had announced cash rewards for the Indian team as well when they had registered a historic 2-1 Test series victory over Australia.

Indian team is currently in New Zealand and are slated to play a five-match ODI series with hosts, beginning January 23.