Book, shawl to Prince William and Kate from Modi

Members of the royal family are expected to declare gifts they received and those being a part of the Royal Collection, can never be sold. 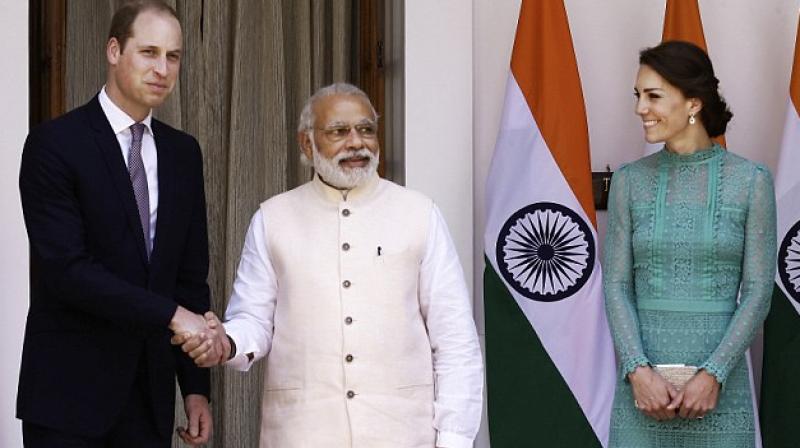 London: Prime Minister Narendra Modi had presented UK's Prince William and his wife Kate Middleton with a set of five gifts, including a book, an embroidered shawl and a lotus lamp, during the royal couple's visit to India last April.

According to the official list of gifts received by members of the British royal family released by Buckingham Palace on Saturday, the couple - the Duke and Duchess of Cambridge - came back to the UK with at least 20 scarfs, a number embroidered fabric, Assamese teabags, handbags and handmade biscuits from a range of gifts presented by Indian royal family members and other individuals.

"The Duke and Duchess of Cambridge received a book, two photographs, an embroidered shawl in a decorative box and a lotus deepam (lamp) from the Prime Minister of India," the palace said in its release.

A number of items, including books, t-shirts and a soft toy dog, were received by William and Kate on behalf of their children, Prince George and Princess Charlotte, who did not travel with them on the royal tour of India in 2016.

The couple had covered Mumbai, Delhi, Agra and Kaziranga National Park in Assam during their six-day combined tour of India and Bhutan in April 2016.

The list of gifts received by Queen Elizabeth II, who celebrated her 90th birthday in 2016, includes a large bronze of a carriage pulled by 40 horses presented by the Royal Cavalry of Oman, purple salt, a Post-it Note holder and two stags.

A new polymer five-pound note, with the serial number ending 002, was presented by the Bank of England and is likely to be worth a lot in years to come.

The monarch officially received the first note but it is not classed as a gift and is now in the Royal Library at Windsor Castle.

Members of the royal family are expected to declare all gifts received by them and they can never be sold as they are considered part of the UK's Royal Collection.