Hoshang Merchant – a midnight’s child, as old as our independence – reflects on the coinciding evolution of the life of a poet and a nation 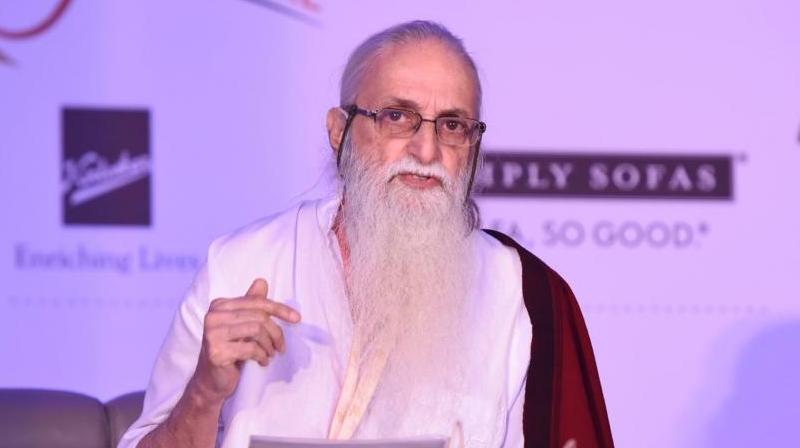 Hyderabad: Finding a semblance of normalcy in life after a pandemic that pushed our world towards seclusion – when quarantine and self-isolation became medical recommendations for staying safe – as India as a nation celebrates its 75th independence day, poet, thinker, gay activist and academic Hoshang Merchant – a midnight’s child, as old as our independence – reflects on the coinciding evolution of the life of a poet and a nation.

Prof Merchant released his life’s most comprehensive collection, an opus, and the best slice of his oeuvre – Rebel Angel – in the midst of the worst health crisis of over a century, an ongoing existential war – and tasted triumph, the book emerging as a bestseller.

As he appears on a scheduled Zoom call window, he resembles a seasoned actor auditioning for the role of Professor Albus Dumbledore, wrinkled white skin, magnetic eyes, sharp nose and an unmistakable voice. Or given the Indian-ness he reaffirms with every idea and sentence, maybe he should be seen as an aghoori sadhu amongst Parsi priests.

He is old, as old as Independent India. He sounds sad at times, yet exudes mischief, child-like curiosity, youthful energy, and coquettish humour. Sharp and devilish in putting down rivals and bad ideas, he speaks his heart out on his life, literary journey, losing innocence and finding it all over again.

A. Bombay (he corrects).

Q. How fortuitous was it to be born, as a Midnight’s Child, in Bombay, in 1947, to the direction and plot of your life? How did you feel when it became Mumbai?

A. Monumental. Bombay was a westernised thought of India; and a microcosmic model of what many in that generation believed the rest of India would become like. Over 70 years, India has become many things but not really like the Bombay I was born in. When Bombay was renamed as Mumbai, it felt like sectarian and chauvinist tendencies won. We must respect transition, as Tagore observed, based on the determinism of people; after all, ‘we, the people’ are the three most powerful words in the Constitution.

But I resent the renaming of Bombay. India lost when and Bharat asserted. I resent every renaming because I see it as a violation of history.

Q. You are a proud Indian. Why would you resent a post-colonial reassertion of an indigenous culture?

A. The word cosmopolitan comes from the times of the Roman Empire, where the provinces tried to imitate the mothership, Rome. But Bombay was not an imitation of imperial London. It was a new India’s mixture, a bhelpuri of regional cultures, a cosmopolitan ideal being constructed amalgamating varied cultures, Marathi, Gujarati, Tamil and so on, even as migrants from every corner of the country came and melted into its fast-paced life, trying to find opportunities and success. Bombay was not a relic of cosmopolitan imperialism, it was a future-looking melting pot.

Q. So Bombay was India’s best living example of the Independence era idea of India?

A. Yes, we are being post-colonial. Of course, there were relic of the past trying to assert themselves, the aristocracy of old money and spirit but the city was being shaped by a modern, progressive thinking middle-class; the city throbbing with life and modelled on the rebellious, curious, possibility-filled mood of a mid-western American university.

Q. On cue, universities. As a professor, how do you see the happenings of our universities in the last few years?

A. The siege of our universities makes for a good headline, but it is not recent. Wasn't the JNU under siege for over five decades by the leftists? We have known reports of lady scholars who did excellent work with a right-wing slant, not getting opportunities or rewards commensurate with their work. They would not be promoted, they would be blatantly denied opportunities. The dictatorship of the Left is no less dangerous.

Of course, as we saw since the fatwa was issued on Rushdie, religious right-wing autocracy is equally dangerous, even if it is a narrow-minded puritan imitation.

Q. When did you realise you are gay and how did it impact your life?

A. Pretty early. It must have been in class five. Once my parents realised it, I was given psychotherapy. My mother would beat me violently… for a sexual crime of thought. It traumatised me. I knew, however, that I was attracted to men and it made me lonely. Then hypocrisy began to manifest. Our Parsi community has a way of doing things… do them silently. My father had a mistress which all of Bombay knew, except my mother. Then I was sent abroad for education.

Q. Did you find any significantly higher intellectual sexual freedom in the West?

A. I left before I was 21. I was sent to Occidental College, one of the most expensive private colleges, and I wasted my privilege to express my anger against my father, because he was paying for the education. It was an elite experience. I returned after only a nine months course to take care of my mother, who passed away. It was the darkest phase of life.

A. Poetry snarls an angry heart and a hurt soul. I studied English literature, finished my bachelor of arts - English honours course. I was reading Auden and T S Eliot. I did my Ph. D, but was not writing much till I turned 23, except for coursework. My doctorate was on Anaïs Nin, Henry Miller’s girlfriend, essaying, novelist and erotica writer.

Even in literature freedom has eluded though authors, poets and thinkers have claimed it, after a bitter fight, again and again. Look at the issue of acceptance of erotica as an acceptable genre in literature. Anaïs fought for it and reduced the gap between pornography and literature.

I went to America as a young dream poet. I was so stupid to actually believe the streets of USA were paved with gold, instead I found blood and pain of exploitation of Red Indians and the Blacks. Poets are literalists of imagination.

In 1968, I did not find America to be a land of the free for a young man to be gay. Truth is, social reality takes a long while to change and we have to fight for our worldview every single day. It is the same for LGBTI, the same for women, for Dalits.

I am aware of my privilege, a man from the social elite, powered with language, but what the rest of the people. An author lives in the mind. Poets don’t live in the society, they are born as a soul empowered to select a society of their own, to paraphrase Emily Dickenson.

Q. In that sense, every writer is a rebel against society, against status quo, trying to imagine a different world?

A. Society allows for good ideas to win but slowly, far too slowly. And some people don’t have the time. What if a gay author is also a Black or Jewish? It can become a double or triple whammy. We in India today are freer today as genders go. My sisters were freer than my mother but they too had to struggle all over. But my sisters could become freer because they were daughters of my mother, who could fight for them too.

But authors are not the only rebels seeking change. Everyone suffering is. Some succumb, some retreat into madness, and some win. Authors capture the angst.

Q. Finally, your latest work has got critical attention. How important is it for you?

A. For any writer – it is just the word that matters. In the Bible, the genesis is the naming day, when Adam was named, plants and animals got named. The act of naming is the act of creation, the identification of reality. Words are power but they can be used to abuse; the weapons of the anti-poet. I believe in the sacredness of words. I wanted to capture all words, not just as a poet but also my prose to get together as an anthology. It means life to me as an old man in the dusk of life. It has found resonance. It is an inter-linked collection of 20 years of words, from the earliest to most mature pieces. Indulge me, I want a little fame before I die (laughs).

We are seldom truly free, except in the arts. We will never be truly free in this world because society is out to catch you and put you in a box. A box suits the world. But a poet fights on, because only when we are free, can we free others. Empires will fall, words will last.

Q. As India touches 75 years of Independence, and you turn 75 too, what does the country mean to you?

A. We are a Hindu culture, the only surviving ancient cultures. We should not confuse Hinduism, a great wise culture of the world, as a religion. To do so would be an insult, to shame it. But to politicise it is a shame too.

Q. Will end with a question of love – as a gay, I notice so many women falling in love with you. What is the secret?

A. (Starts laughing). As an Indian, I benefit from the perception of instant approval for fair complexion. Gay men are sexually safe… we are pretty sentimental. I talk of love all the time and the romantic myth of the poet comes in.