The schoolboy from London clinched the title by answering a question on 19th Century artists William Holman Hunt and John Everett Millais. 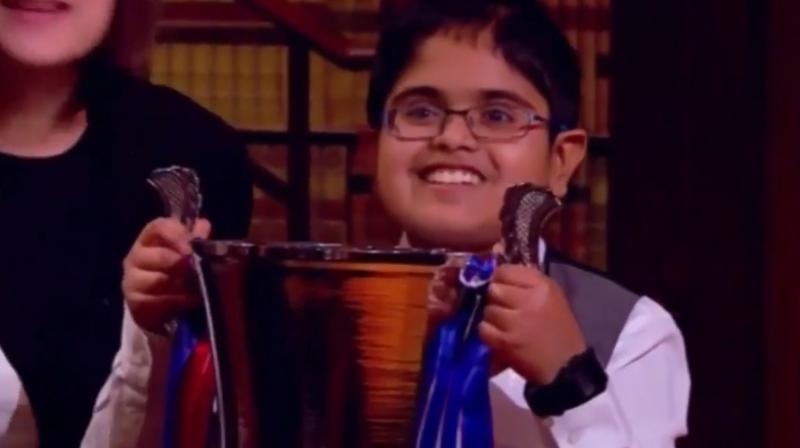 In the final, Rahul impressed with knowledge of his chosen subject - Edward Jenner's medical innovation and methodology in 18th Century England (Photo: Facebook)

London: A 12-year-old Indian-origin boy, believed to be having an IQ higher than Albert Einstein and Stephen Hawking, has been crowned as the UK's 'Child Genius' in a popular television quiz competition.

Rahul Doshi, who a few days a back became an overnight sensation after answering all questions correctly in some of the earlier rounds, won the Channel 4 show 'Child Genius' by beating his nine-year-old opponent Ronan 10-4 in the programme's finale last night.

The schoolboy from north London clinched the title by answering a question on 19th Century artists William Holman Hunt and John Everett Millais.

"It didn't sink in straight away, but it was really nice," Rahul said after winning the title.

In the final, Rahul impressed with knowledge of his chosen subject - Edward Jenner's medical innovation and methodology in 18th Century England.

"I was bursting with pride," said his father Minesh, an IT manager who had entered his son into the competition.

The final followed an intense competition - aired through the week - which saw the candidates showing off their maths, English, spelling and history skills as well as memory powers.

Rahul had been one of the favourites throughout, after scoring very highly in previous rounds - and even bagging a full house in the very first round of the series.

Hehad captured the imagination of audiences during the competition after he correctly memorised the order of a pack of cards.

Rahul, whose ambition is to become a financial adviser, had revealed his strategy for the final as: "The key is to block out everything else and remain calm. So just focus on your goal. Mine was to answer as many questions as I could correctly and that helped me stay calm and do quite well in the early stages."

Rahul has an IQ of 162, which is believed to be higher than the likes of Albert Einstein and Stephen Hawking, and qualifies him to be a member of Mensa club - the largest and oldest high IQ society in the world.

He was cheered on by father Minesh and pharmacist mother Komal during the show.

His father attracted some social media fury for laughing at a wrong answer given by his son's closest rival, Ronan, in a tense finale.

"#ChildGenius an adult laughing at a children getting a question wrong shocking behaviour. Shame on you Rahul's father," read one of the comments on Twitter.

But Minesh Doshi had been very vocal about his competitive side throughout the competition.

He had previously said: "We are here to win. There's no two ways about that."

Twenty contestants aged eight to 12 were whittled down to one winner over the course of a week as part of the 'Child Genius' 2017 series.