The Donskoi is believed to have been carrying the gold supplies of the entire Second Pacific Squadron when it sank. 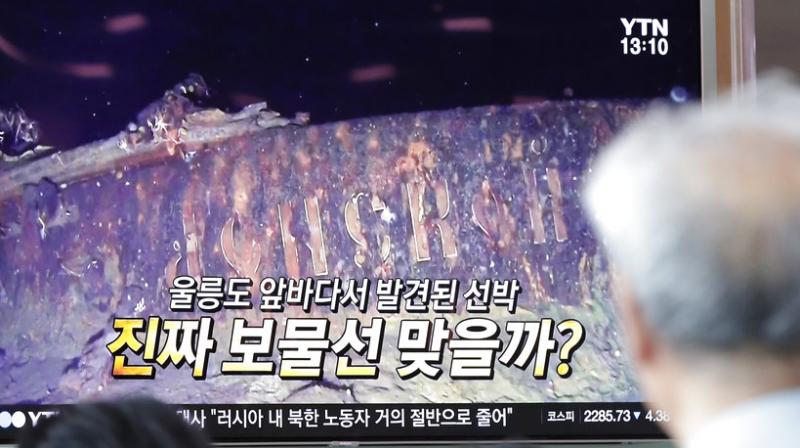 People watch a TV screen showing the news program reporting about a sunken Russian warship at the Seoul Railway Station in Seoul, South Korea, Thursday, July 19, 2018. A South Korean company's claim to have found a sunken Russian warship has triggered investor frenzy amid unconfirmed rumors that the ship was carrying 200 tons of gold when it sank in 1905. The letters read "Is it real treasure ship?" (Photo: AP)

A South Korean salvage team has discovered the wreck of Russian warship Dimitrii Donskoi, 113 years after it sank.

The warship was scurried off the island of Ulleungdo in 1905 to stop it falling into Japanese hands following the battle of Tsushima during the Russo-Japanese War.

The Donskoi is believed to have been carrying the gold supplies of the entire Second Pacific Squadron when it sank, which would be worth $133billion at today's prices.

A Russian campaign group has since demanded that the entire fortune be returned to Moscow as a 'goodwill gesture'.

Yaroslav Livanskiy, an official of the Russian Public Movement to Commemorate Those Who Died Defending the Motherland, led the calls.

According to Livanskiy, who is also head of a salvage group in eastern Russia, the cruiser is a priceless find for Russia and an invaluable relic.

Divers from salvage firm Shinil Group have been searching for the wreck for years and finally located it on Saturday at a depth of 1,400ft (434m) around a mile off the coast of Ulleungdo.

Teams came to the conclusion that it was likely to be Donskoi because its sail plan appeared identical to the long-lost ship, which had three sails and two chimney stacks, relying on both wind and coal power to drive it. A further exploration the day after confirmed it to be the Donskoi after the ship's name was spotted written in Cyrillic across its stern.

Divers said the stern of the ship is in a poor condition along with the hull which has partially split, but that the upper wooden deck remains largely intact.

A large number of iron boxes were also discovered in the ship's hold, which may contain the gold, though divers have not yet been able to open them.

Operations are now underway to raise the wreck from the sea bed along with companies from China, Canada and the UK.

Shinil Group believes there could be as much as 200 tons of gold on board the ship, which would be worth around $133.4billion.

Should their hopes prove correct, they have pledged to donate 10 per cent of their find to help develop Ulleungdo, which is a largely uninhabited island but an important tourist destination for South Korea.

Development plans would include a museum dedicated to the ship, according to The Telegraph.

Another 10 per cent will be gifted to Russia as the owner of the wreck, and would be used on projects such as a railway to connect Russia and South Korea running through North Korea.