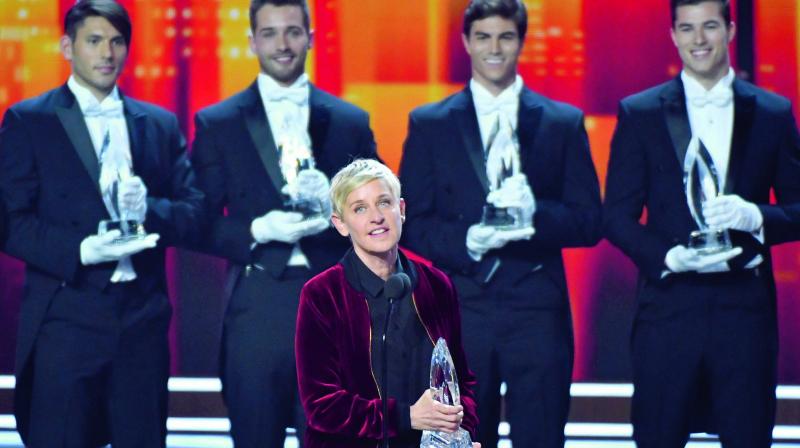 Los Angeles: Actor and comedienne Ellen Degeneres made People’s Choice Awards history by becoming the most decorated celebrity in the TV ceremony’s 43 years.

The Finding Dory star, who hosts her own top-rated daytime talk show in America, picked up her 20th, 21st and 22nd awards at the Microsoft Theatre. Singer-actor Justin Timberlake presented her with the favourite daytime TV host and favourite animated movie voice trophies, while her sketch romp around a shopping mall with Britney Spears, which aired on her show in 2016, earned her the favourite comedic collaboration prize.

Handing her another three honours, Timberlake called Ellen “one of my very good friends” and “one of the best people on this planet”. “This is amazing. 20 is ... 17, I get it, 18, sure, 19, I can see it. But 20, this is outrageous. This is really something that means more to me because it comes from the people,” DeGeneres said while accepting the honour. “And everybody keeps thanking the people and it’s redundant but you are the people who are responsible for me being up there so I say thank you people.”

DeGeneres’ Finding Dory film was also named favourite movie and favourite family movie at the ceremony. Timberlake was also a big winner at the awards bash, picking up favourite male artist and favourite song for Can’t Stop The Feeling.