‘Padmaavat’ fans can finally heave a sigh of relief since the movie is hitting the movie screens in a week. 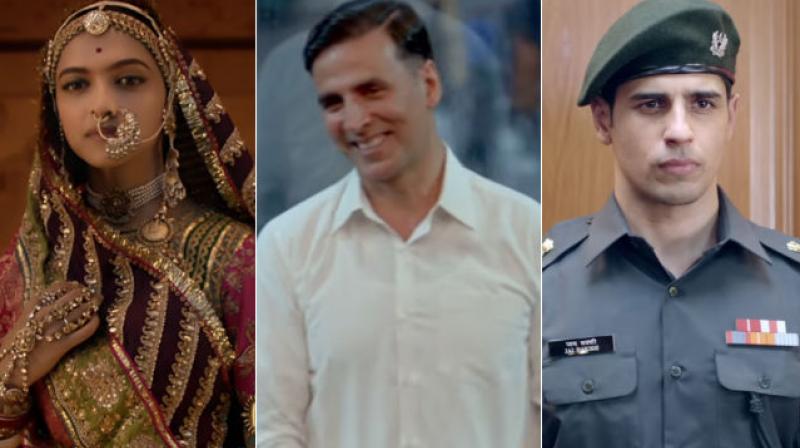 A still from 'Padmaavat', 'Padman' and 'Aiyaary'.

Mumbai: ‘Padmaavat’ fans can finally heave a sigh of relief since the movie is hitting the movie screens in a week.

The movie, which was supposed to release with Akshay Kumar’s ‘Padman’, seems to have brighter days, as the latest reports suggest the movie will have a solo release.

Sanjay Leela Bhansali and Viacom 18 met Team ‘PadMan’ in Worli, when Sanjay requested Akshay to avoid the clash, and reportedly the actor agreed to it.

At the recently held press conference, Sanjay Leela Bhansali confirmed the same saying, “‘Padmaavat’ has been made after facing a lot of difficulties, so we decided on release date of 25 Jan but it was with Akshay Kumar for release of his film 'PadMan'. We requested him to move release date of his film ahead and he agreed. We will be grateful to him for a lifetime. Akshay indeed has a large heart to exude the already decided  release date. I would like you all to give him a big hand for this kind gesture.”

Akshay Kumar added, “It is essential for them to release the film ‘Padmaavat’ as quickly as possible, so I agreed to move the release date of my film 'PadMan' ahead, which will now be released on Feb 9. With due respect to SLB as his film ‘Padmavaat’ has a higher stake in comparison to my film, thus I agreed to his request. We from the film fraternity are all like a family and we need to stand by each other.”

But look at the luck. Neeraj Pandey’s ‘Aiyaary’, starring Manoj Bajpayee, Sidharth Malhotra, Rakul Preet Singh and Pooja Chopra, which shifted its date to avoid a clash with both the big-budget films, will again be competing with R. Balki’s ‘Padman’. The screens will be divided between not only ‘Padman’ and ‘Aiyaary’, but also the ‘Pyaar Ka Punchnama’ jodi – Kartik Aaryan, Nushrat Bharucha and Sunny Singh, who are coming together for ‘Sonu Ke Titu Ki Sweety’.