Her dramatic leaps and sensual style impressed the audience. 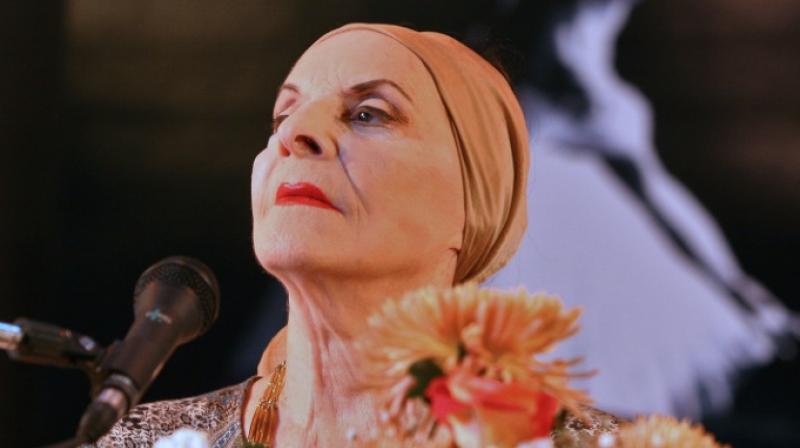 Turning down myriad offers to leave the island throughout her career, she created the Academia de Ballet, which was closed in 1956 by the government of Fulgencio Batista. (Photo: AFP)

Cuba: Cuban ballet legend Alicia Alonso, who developed a new Latin-influenced style and taught well into her 90s despite being practically blind for most of her dancing career, died on Thursday. She was 98.

Known for her strong character and strict discipline, and revered in Cuba as one of its most important personalities, Alonso impressed audiences with her dramatic leaps and sensual style.

Even at 40, she was still able to perform the 32 fouettes of "Swan Lake." She was the only Latin-American ever to have been recognized as a "prima ballerina assoluta" -- a rare honor awarded to the most exceptional female ballerinas of their generation

"Alicia Alonso is gone and leaves a huge void, but also an insurmountable legacy," President Miguel Diaz-Canel said on Twitter. "She placed Cuba on the altar of the world's best dancing. Thank you Alicia for your immortal work."

The National Ballet of Cuba, a company she founded, confirmed her death. Alonso was known for being temperamental but also for her strict discipline: as a choreographer, she was known for perfectionist demands that required exhausting rehearsals.

In a country of salsa where classical ballet was little known before her, Alonso founded the National Ballet of Cuba and developed its unique style, a blend of the island's sensual rhythms with technical precision.

Alonso hung up her ballet shoes as she neared the age of 75, but remained in the studio as a demanding teacher and choreographer, always svelte and elegant in bright headscarves, lipstick and nails.

As her eyesight failed her, she would often say, "I dance in my mind." Alicia Ernestina de la Caridad del Cobre Martinez del Hoyo was born in Havana on December 21, 1920. She later took the name of her first husband, choreographer Fernando Alonso.

She started dancing early, making her debut as a ballerina in Havana in 1931. Her international career was launched in 1938 in Broadway musicals and in 1940, she joined the Ballet Theatre of New York, now the American Ballet Theatre, becoming its prima ballerina.

Debuting at the New York's Metropolitan Opera House in 1943 with the principal role in "Giselle," Alonso delivered lively and precise performances that brought her international acclaim.

Her "Cuban version" of classics like "Carmen," "Sleeping Beauty," "Coppelia," "Swan Lake" and "The Nutcracker" also won praise. Accolades came despite a heavy handicap: Alonso was practically blind from the age of 20 after her retinas became detached.

She could only see shadows and, for most of her career performances, was guided by lights positioned on the stage. After conquering world capitals and passing through Russia's renowned Bolshoi and the Paris Opera, Alonso returned to Cuba in 1948.

Turning down myriad offers to leave the island throughout her career, she created the Academia de Ballet, which was closed in 1956 by the government of Fulgencio Batista.