The girl from Punjab could not walk because of the condition. 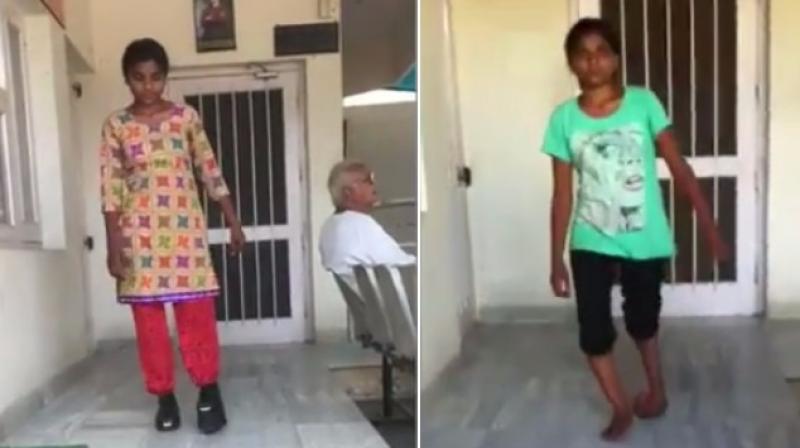 An 18-year-old from Punjab, born with  eight toes is able to finally wear shoes after receiving life-changing surgery. Rajwant Kaur suffered depression after a deformity she was born with forced her to rely on her siblings for help.

Kaur had club foot, which made it difficult and painful for her to walk, according to the Daily Mail.. Her misshapen foot also prohibited her from wearing shoes. According to NHS, the condition causes the "feet to point inwards".  The cause is not yet known, but it could be genetic.

Since her family could not afford treatment, a doctor performed the surgery, a first of its kind for free.  Dr Rattan Lal Mittal, 80, an orthopedic surgeon at Mata Kaushalya Hospital, in Patiala, performed the operation in August 2016. He named the surgery 'Octoplus Club foot' due to the foot's likeness to the animal.

"She suffered from a complex and a rare congenital orthopedic disorder where she had eight toes - seven can clearly be seen while the eighth is within the skin," Dr Mittal is quoted as saying by the Daily Mail. Adding, “We removed the club foot deformity and the extra toes and her foot was fully corrected.”

While the surgery was a success, the procedure left Kaur with one leg 2.5 inches shorter than the other. Kaur underwent months of physiotherapy to rectify her condition.

Kaur is “extremely happy" the surgery and treatment worked, as she can now finally wear shoes and hopes to be able to wear "pretty heels" one day. For treatment for club foot to be most effective, doctors recommend it should start within two weeks of birth.