Nobody could have played Bharat better than Salman Khan: Bhushan Kumar

Testimony of the same is the adorable tweet that Bhushan Kumar posted yesterday. 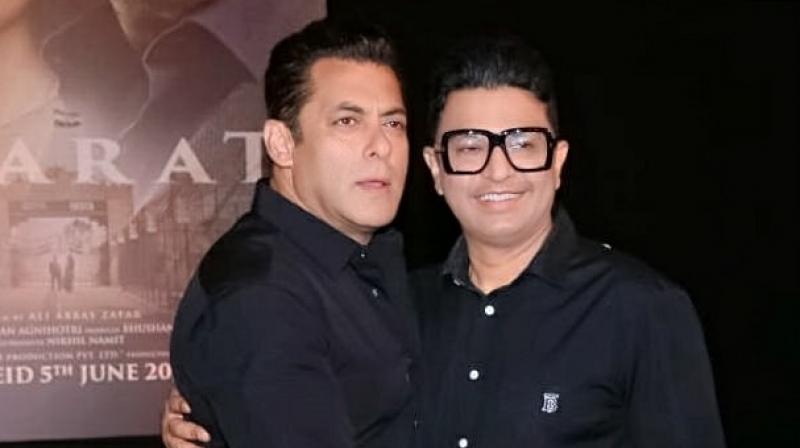 Mumbai: 'Zinda' the new song from Bharat was launched yesterday, during which one of the producers of the film Bhushan Kumar couldn't stop praising the leading man of the film Salman Khan as the leading producer believes that nobody could have played Bharat better than Salman Khan, himself.

Testimony of the same is the adorable tweet that Bhushan Kumar posted yesterday. Bhushan Kumar took to his social media and he tweeted, "Nobody could have played Bharat better than you, it's always a pleasure working with you @BeingSalmanKhan Bhai".

Nobody could have played Bharat better than you, it's always a pleasure working with you @BeingSalmanKhan Bhai pic.twitter.com/Obz0dQYPWO

With Zinda, Bhushan Kumar's T-series has given a new anthem to the nation.

With an exceptional run at global markets with Hindi Medium, Sonu Ke Titu Ki, Sweety, Aashiqui 2, Raid, amongst others, T-Series has a total of eighteen films lines up in the coming year and several under production for 2020 already in the pipeline.

Bharat, De De Pyaar De, Saaho, Street Dancer, Kabir Singh, Tanhaji, Batla House, Marjaavaan, amongst others, Bhushan Kumar has collaborated with some of the biggest names in the industry to deliver new, interesting and varied content to the audience.

With his earthy intelligence and management instincts, Bhushan Kumar has emerged as an indigenous achiever spreading T-Series across a broad spectrum, fruiting success in all aspects.