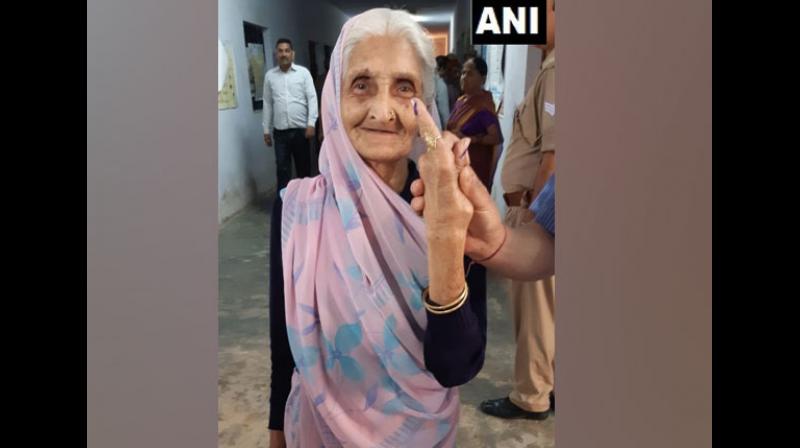 Senior citizens and first-time voters stole the show with their enthusiasm as they arrived at different polling stations to cast their valuable votes. (Photo: ANI)

Jammu and Kashmir/Uttar Pradesh/Maharashtra: Polling began on Thursday in 95 parliamentary constituencies in the second phase of ongoing elections. Senior citizens and first-time voters stole the show with their enthusiasm as they arrived at different polling stations to cast their valuable votes.

In Kathua district of Jammu and Kashmir, 80-year-old Jogindero Devi came directly from Kathua district hospital to cast her vote at her designated polling booth, following which she was taken back to the hospital.

Meanwhile, in Udhampur district, a newly-married couple arrived directly from their wedding venue, at the polling station to cast their votes.
On being asked what issues concern them, Manisha Sharma and Saurav Sharma told ANI that they are voting for development.

"We decided to vote although they were getting married. It is equally important to vote and that's why we took time from marriage and came to the polling booth to cast our vote," said the groom.

In Karnataka’s Mangaluru district, mom-to-be Kavya Sanjeev proudly showed off her ink-stained finger after casting her vote right before her baby shower.

Another pregnant woman in Maharashtra's Solapur arrived at the polling station along with her husband in Nehru Nagar.

Purvashi Rana, a resident of Doda district in Jammu and Kashmir, voted for the first time in general elections.
“I like that they have added VVPAT machine to clear our doubts. It lets us know that the vote has actually gone to the party we voted for,” she said.

“People here don’t need development or anything else, all we need is peace. I want the future government to take important steps to solve the Kashmir issue and ensure peace,” said Shaikh Fayaz Ehmad, a local resident of Jammu and Kashmir's Ganderbal district.

In Latur district of Maharashtra, 105-year-old Kavaibai Kamble arrived at Harangul Budruk polling booth, accompanied by her family, to exercise her franchise.

Several senior citizens in Uttar Pradesh’s Aligarh also came out to vote in the ongoing Lok Sabha elections with much enthusiasm.

Elaborate security arrangements have been put in place for the Lok Sabha elections and tight vigil is being maintained at interstate borders.