The event saw the Mayor of Toronto, John Tory, joining Trudeau in preparing 'pongal' - a dish made of rice and lentils. 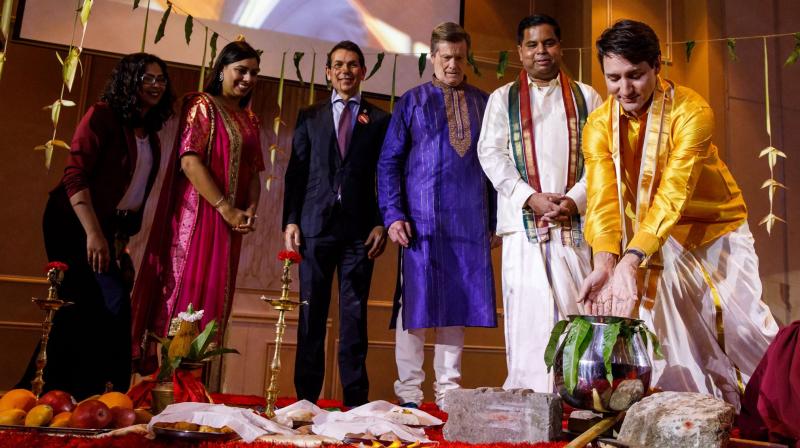 In another gesture of geniality, the Canadian Prime Minister Justin Trudeau celebrated the festival of Thai Pongal while wearing a kurta and a traditional veshti.

The PM shared photos on his social media which showed him celebrating the popular Tamil harvest festival and the Tamil Heritage Month in Canada.

"Iniya Thai Pongal Nalvazhthukkal!" or 'sweet Pongal greetings', wrote Mr Trudeau in his post that has garnered over 38,000 'likes' on Facebook since then.

The event saw the Mayor of Toronto, John Tory, joining Trudeau in preparing 'pongal' - a dish made of rice and lentils.

On January 14, Mr Trudeau had shared a video to wish Tamils in Canada and around the world a happy Pongal. "Tamil Canadians make important contributions to our country and help keep Canada open, inclusive and strong," he said in his address.

Internet soon went into meltdown with many commenting on his post.

One Sarah Eldeib wrote, “So involved in multiple communities across the country. You’re an amazing role model, Mr. Trudeau. Thanks for motivating us young people to be open hearted and minded!”

While another Jacinthe Payant wrote, “Thank you Justin for your leadership. I've never been more proud to be Canadian since you took over. The respect you have shown everyone is so inspiring to the good people of Canada & other countries. Your work ethic is so impressive. I wish you could PM our beautiful country forever!”

In the past, the Canadian PM has wished Indians in Canada on Eid, Diwali and Vaisakhi.