‘Manhunt’ after hopes melt away

BBC weatherman comes under scanner after his snow forecast fails to materialise. 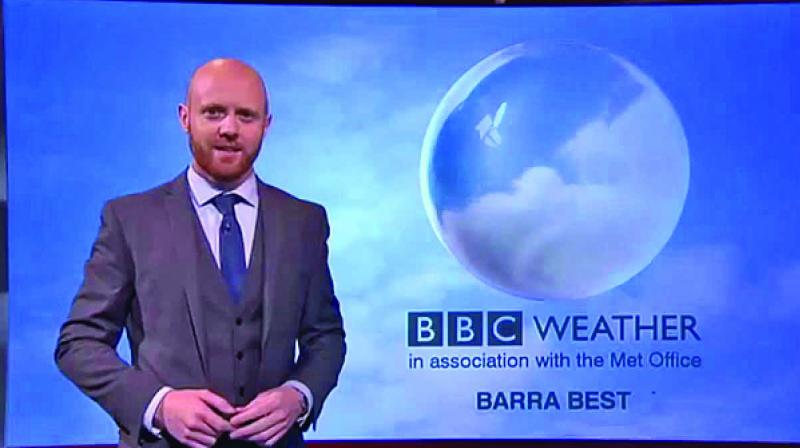 London: Disappointed policemen in the UK have put out a ‘wanted’ poster for a BBC weatherman and a reward of two doughnuts for information leading to his capture after his snow forecast failed to materialise.

The police in Craigavon, Northern Ireland, put out the playful appeal, urging BBC Belfast weatherman Barra Best to “hand yourself in” after the veteran reporter's forecast of snow across the country missed the mark. A wanted poster issued by the police has a picture of Best with the caption, “Wanted for building false hopes of children and cops in craigavon, Barra ‘dream destroyer’ Best.”

The wanted poster for Barra appeared on the Police Service of Northern Ireland (PSNI) Craigavon Facebook page, with police saying, “We’re keen to track this man down, Craigavon’s new most wanted!” “Whilst initially we thought that, as with most things, the lack of snow would be blamed on us, in the last 24 hours we have had new information. The fact that there was some bloke on TV skiing in Coleraine, whilst in Craigavon we had to have a whip round to make a snowball is the fault of...THIS MAN!!” police said.

“Barra you may hand yourself in now. We will find you. We know there are many front rooms across Craigavon you’ll be making an appearance in over the coming days. You broke our snow craving hearts. Craigavon is after you!” they said. A reward of two doughnuts has been offered in the poster for information leading to his capture. However, the intrepid weatherman is not going down easy.

He responded defiantly to the appeal, saying, “You better get the Feds and Interpol involved. I’m snowwhere to be found.” That, in turn, led to a more conciliatory message from the police: “Barra there is another way out of this. If you mark ‘Roundabout F’, Craigavon on your next weather map, we’ll consider downgrading the offence to simple possession of class A hopes and dreams.”