Initially, there were speculations that ‘Rahnuma,’ ‘The Ring’ or ‘Raula,’ could be the film’s title. 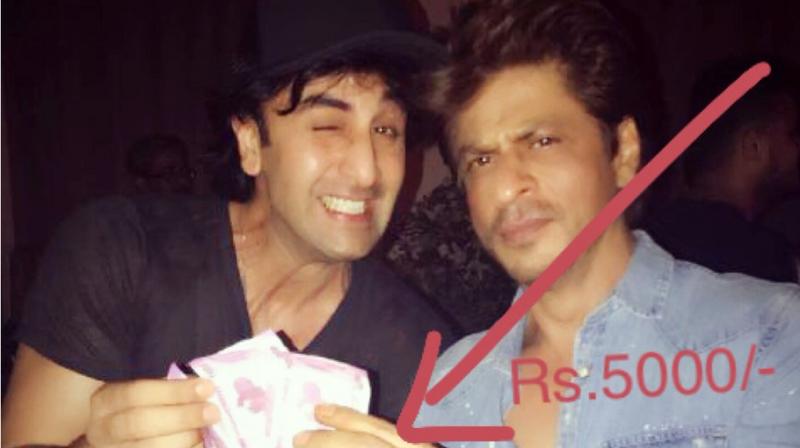 Initially, there were speculations that ‘Rahnuma,’ ‘The Ring’ or ‘Raula,’ could be the film’s title.

However, it was later clarified that they were just the working titles, and anyone from the crew or their friends who suggested an appropriate title for the film will be rewarded with a cash prize of Rs 5000 from King Khan himself!

In the queue were Alia Bhatt, Karan Johar and Ranbir Kapoor amongst others.

Finally, when Shah Rukh Khan announced the film’s title a few days ago, he posted a cryptic message, which read, “Just in case Ranbir Kapoor ever claims it…the title Jab Harry met Sejal was never ever suggested by him! So he doesn’t win the Rs.5000 reward."

He clarified, "I suggested the title Jab Harry Met Sejal to Shah Rukh Sir and Imtiaz Ali. But the sad part is that I had no idea about the reward, so Shah Rukh Sir, I am coming to Mannat (SRK’s residence), keep the Rs 5000 ready in cash! To be honest I was shooting at Mehboob Studio, where Shah Rukh Sir, Imtiaz Ali and Anushka were also shooting. We all were sitting in a van together and discussing various options for the title of the film, and I suggested this title (Jab Harry Met Sejal), everybody laughed at me for the ‘bakwas’ title I had suggested. Today they have used my title, and I am very happy that I could be a small part of this film. It is by far the most exciting actor-director duo, Shah Rukh Sir and Imtiaz Ali is my favourite duo as a fan and as an audience. Pritam is in this film, Anushka is in this film, and I am happy even I am a part of this film.”

King Khan shared a picture with a quirky caption, "Jagga Jasoos we r quits now!!! Hisaab barabar. Give @karanjohar his share for the ‘Jab’ part in JHMS please."

Jagga Jasoos we r quits now!!! Hisaab barabar. Give @karanjohar his share for the ‘Jab’ part in JHMS please. pic.twitter.com/gPtrUdwedD

Ranbir appears too excited on receiving his Rs 5000.

After which Karan Johar replied saying, "Yes am waiting !! Ranbir owes me 1,250 rupees!"

This episode will surely bring smiles to everyone’s faces!