Alam exclusively shares his experience, what he had gone through during detention and talks about the expectations from Bangladesh govt. 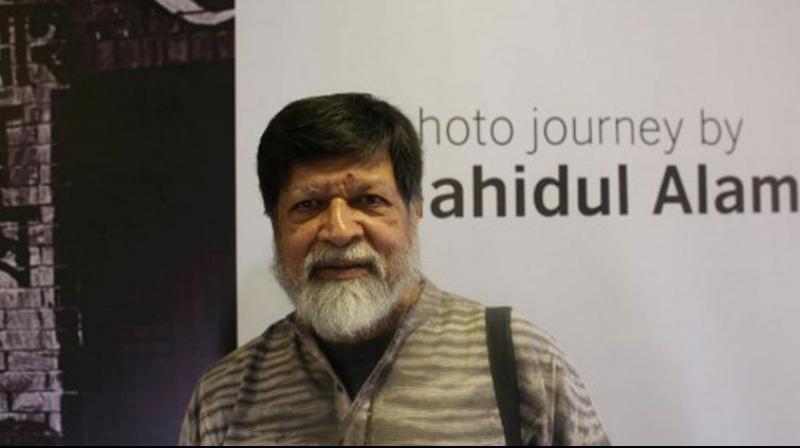 On August 5, 2018, Alam was arrested and detained for his interview to Al Jazeera and posts on social media that criticised the Bangladesh government. (Photo: AFP)

Mumbai: Shahidul Alam is an internationally recognized Bangladeshi photographer based in Dhaka. He is also a writer and an activist with an interest in education and new media. He is the creator and the principal of Pathshala South East Asian Academy, one of the most important schools of photography in the world.

On August 5, 2018, Alam was arrested and detained for his interview to Al Jazeera and posts on social media that criticised the Bangladesh government.

He is currently out on bail and the case still stands. If convicted, Alam could face a maximum of 14 years in jail.

While speaking to The Asian Age, Alam exclusively shares his experience, what he had gone through during detention and talks about the expectations from the Bangladesh government.

What inspired you to become a social activist, photographer and a teacher?

My involvement extended to race, gender and class rights. I wanted to play a role in ensuring social justice. It wasn’t clear how I would do it, but photography seemed an obvious choice.

Once I held a camera, there was no looking back.

In your Al Jazeera interview, you mentioned that the 2018 protest had “larger” factors. According to you, what were those factors?

Shahidul: Some factors were discontent that had been brewing for some time which included the financial scandals (like Hallmark), the looting of Tk 22,500 crore from the banks (CPD report), the numerous instances of extrajudicial killings and disappearances and the wide-scale harassment and arrests of dissidents and opposition activists, (all widely reported in the media) were reason enough.

But the fact that the Bangladeshi economy was designed specifically to serve the rich was a festering wound. According to Global Financial Integrity (GFI), USD 9.7 billion had been syphoned from Bangladesh in 2013 alone.

Your arrest was in the news. What exactly happened on the night of your arrest?

Shahidul: I had earlier given an interview to Al Jazeera TV where I mentioned these issues. Later, I went out again to file reports and was alone in the flat uploading content. I was talking to a BBC reporter, in preparation for interviews that I was going to give the following morning. I was alone in the flat.

The doorbell rang and a young woman with short hair addressed me as ‘Uncle Shahidul’. Ours is an open house and many activists and students of both me and my partner Rahnuma Ahmed often pass through. I thought she must have been one of Rahnuma’s students.

As soon as I opened the door, about 5 or six plainclothes men walked in and got hold of me. I know enough about the Bangladeshi reality to work out what was going on, and my initial attempt was to resist as long as I could and scream for attention to ensure that my ‘disappearance’ was at least noticed.

As I was resisting, I was literally picked up and was pushed into the lift in a horizontal position, with my head being shoved in. Once the lift reached the ground floor, I was shoved into a van. I continued screaming and kept my legs out to prevent them from closing the door.

It was when they said, ‘close the door anyway’ that I brought my legs in but wedged it apart with my feet. They forced me in, handcuffed me behind my back and blindfolded me.

I continued screaming and when they tried to cover my face, I bit the person’s hand. I was then driven to a location, made to walk up, down and around and weights put on my head.

I heard someone asking for the pins. I was made to sit down on a wooden chair with my hands behind my back and asked for the passwords for my laptop and phones.

I am aware that the laptop could be opened even without the password, and my phones had both face recognition and fingerprint recognition, so there was not much point in resisting and I wanted to avoid unnecessary injury and gave them my passwords.

Aggressive questioning followed when they told me that much more severe treatment was in store. They threatened me with water-boarding and said they would also pick up Rahnuma.

They wanted me to confess to taking foreign money, and being part of a bigger conspiracy to overthrow the government, that I was involved in child trafficking and a Mossad agent.

When I refused to ‘confess’ to any of these accusations, I was hit in the face and started bleeding from my nose and mouth. My eyes were still covered, but I could feel the blood dripping on to my clothes.

I was made to sleep on the floor of an office and taken to the police headquarters the next morning.

What did you face during the police custody (100 Days)?

Shahidul: My treatment in jail was nowhere as bad as the treatment I received on the first night. I was treated with a lot of respect by fellow prisoners and they ensured that the jail wardens also knew they should treat me with respect.

I was able to bypass the initial conditions other prisoners face and was NOT taken to Amdani (from where prisoners are sold), or to the wards but taken to a cell which I shared with a convicted murderer.

I was later given a cell to myself, but when my health began to fail, I was taken to the hospital, where I slept on a bed for the first time. I was later taken to ‘Division’, a segment of the jail reserved for prisoners of a certain social standing.

Here I was in a large room reserved for two prisoners, but I was on my own. I also had a bed (with a very dirty mattress with bedbugs) and a writing desk and chair.

My fellow prisoners went out of their way to look after me, providing me with food, a reading lamp and made me a radio. I had good access to other parts of the jail, though moving around was not encouraged.

Would there be any difference if the protests have not occurred near the general elections?

Shahidul: The upcoming elections certainly created a charged atmosphere; however, considering how the election was managed, it does not seem as if any external factor would have affected the results, which were pre-determined.

With Sheikh Hasina’s re-election in Dec 2018, what changes do you expect from the government in this tenure?

Shahidul: The government now has full spectrum control. The institutions that provide check and balance have largely been demolished.

Except for a few notable exceptions, the media has become a government lapdog, regurgitating government propaganda. I feel corruption will continue unabated.

Freedom of Expression is largely absent and the climate of fear has created an environment of self-censorship.

On the other hand, the government does seem to want to maintain a modicum of respectability overseas, so the increased production of spin, harassment of dissidents and the complete annihilation of any real opposition are on the cards.

In 2014, Alam was awarded the Shilpakala Padak by the President of Bangladesh and in 2018 the Humanitarian Award from the Lucie Awards.

Alam was one of the persons of the year selected by Time Magazine in 2018.