Most of the singers of the band were killed in a plane crash in Sochi last December. 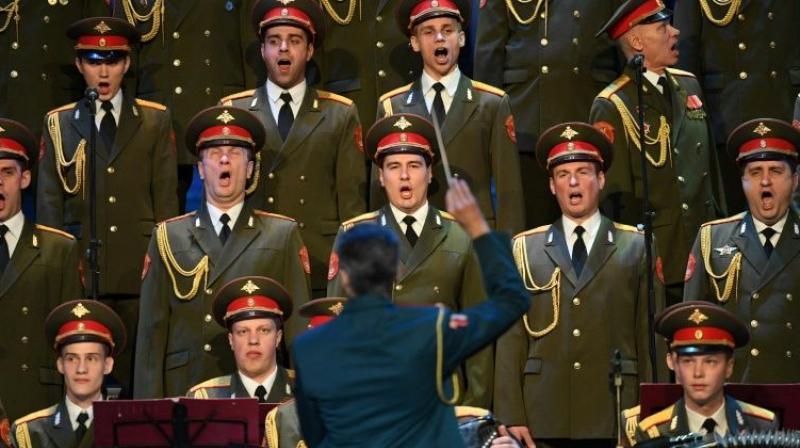 After the crash, the defence ministry vouched to rebuild the legendary troupe and held auditions across Russia. (Photo: AFP)

Surviving and new members of the defence ministry's official choir, in military and traditional dress, gathered in Moscow's cavernous Soviet-built Russian Army Theatre to perform some of the best-known folk tunes to an audience consisting mostly of uniformed soldiers.

"The Alexandrov Ensemble has supported and inspired people in difficult, critical times, and today they themselves need our support," said deputy defence ministry Nikolai Pankov before the choir performed a dozen hits.

Those who died "are with us, and they will always be the heart of the new song and dance troupe," he added.

The ensemble, which was founded in 1928 and is known in the West as the Red Army Choir, lost 64 members -- most of its best singers -- when a plane bound for Russia's military base in Syria crashed off the coast of Sochi on December 25.

The choir had been due to perform for Russian troops serving in Syria as part of New Year celebrations. All 92 people onboard the plane were killed when the Soviet-era Tu-154 crashed, including military officers and journalists as well as the choir members.

After the crash, the defence ministry vouched to rebuild the legendary troupe and held auditions across Russia.

"There are talented, gifted artists who have joined the ensemble," Pankov said.

Young singer Alexei Martirosyan was one of over two thousand people who auditioned.

"Since my youngest years, I dreamt of being in this choir," said Martirosyan, who grew up in a military family.

Maksim Maklakov, another new member, said it was "a great honour and a great responsibility" to be joining the famed choir's ranks after the tragedy.

Viktor Baldin, a Russian general in the audience, described the choir as "part of the Russian soul".

"Without them, nobody would know the military songs so well, or the role of Russia in the First and Second World Wars," he said.

The Alexandrov Ensemble plans to go on tour after a series of Moscow concerts, including to European countries.