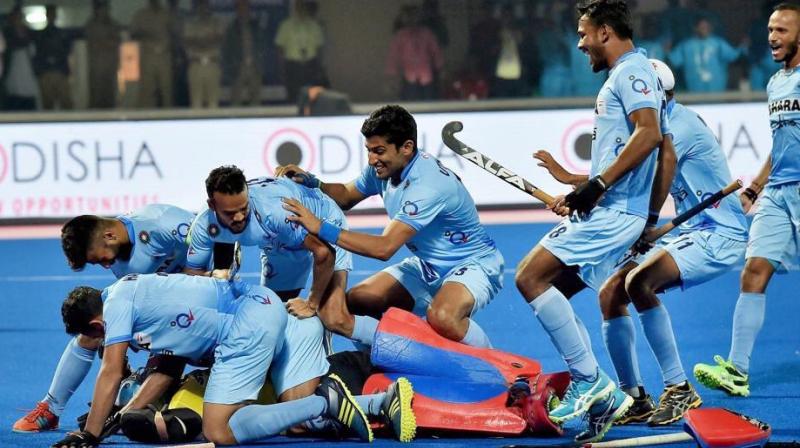 Team India made a dominant start to their campaign, controlling the ball rather swiftly, passing around neatly and quickly to penetrate the Japanese circle. (Photo: AP)

Tauranga : The Indian men's hockey team got off to a winning start in the double-leg Four Nations Invitational Tournament in New Zealand as they notched up a comfortable 6-0 win against Japan here at the Blake Park, Tauranga on Wednesday.

The team made a dominant start to their campaign, controlling the ball rather swiftly, passing around neatly and quickly to penetrate the Japanese circle.

India won their first penalty corner of the game in the seventh minute and it was young gun Harmanpreet Singh who stepped up to drag flick. His attempt though was blocked by the Japanese defender on the line, but since the obstruction came off his body, India were awarded a penalty stroke.

Experienced drag flicker Rupinder Pal Singh broke no sweat in converting a stunning goal to fetch India a 1-0 early lead. India's second goal came in the 12th minute when debutant Vivek Sagar Prasad was quick to pick up a rebound and fiercely strike the ball past the Japanese goal keeper earning India a 2-0 lead.

The second quarter saw India defend their lead as they were unrelenting in creating pressure on Japan, pressing them high up constantly, rarely giving them an opportunity to enter India's D.

Meanwhile, Vivek Prasad found another excellent opportunity in the 28th minute to score, as the Indian attackers broke into the Japanese defence. Vivek was swift to receive an assist in the circle and put the ball in the goal within no time. The teams went into the half time break with India having a comfortable 3-0 lead.

In the 35th minute, a brilliant run-in from Mandeep Singh, who found Dilpreet in the circle, created a goal scoring opportunity for India. Though Dilpreet's first attempt was padded away by the Japan keeper, he was quick to pick it up again and put into the nets fetching India's fourth goal.

Though Japan earned their first penalty corner of the match in the 40th minute, they couldn't find success however, in the following minute a foot foul by a Japanese defender won India their second penalty corner which was brilliantly executed by Harmanpreet Singh as India led 5-0.