Shashi Tharoor gets marriage proposal at Delhi Pride Parade, his reply is perfect

Tharoor has supported LGBTQ rights by introducing a bill to decriminalise homosexuality and arguing in its favour. 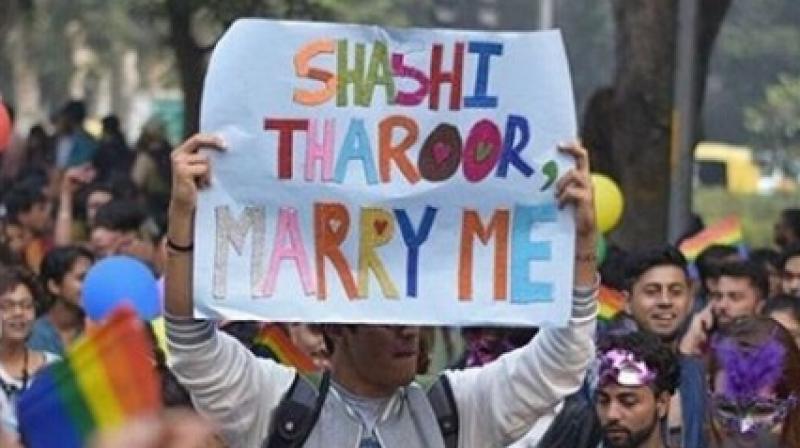 Known to be articulate and witty, Congress MP Shashi Tharoor has been in the news on several occasions in the past few months. Be it adding new words from the English language to the vocabulary of Indians or hitting out at Britain over India’s colonial past, he has won hearts and created a buzz on social media time and again.

Shashi Tharoor’s views on LGBTQ rights were lauded when he introduced a bill to decriminalise homosexuality in parliament. As Delhi witnessed its tenth Queer Pride Parade, one of many colourful placards had something for Tharoor which caught everyone’s attention.

The sign held up by a guy named Surya HK had a marriage proposal for Shashi Tharoor. Everyone wanted the MP to notice the gesture and one e-magazine managed to do so by reaching out to him via Twitter with a picture.

Mr. Shashi Tharoor you should really see this. You have a huge fan following... #DelhiQueerPride2017 pic.twitter.com/so9O036a9B

Tharoor didn’t disappoint as he responded with a witty reply to the moving message from Surya.

Haha! Now if they were only registered to vote in Thiruvananthapuram, it would be even better! https://t.co/kGzj3T1mf9

In the past Tharoor has argued in favour of LGBTQ rights by citing Shikhandi’s example from Mahabharata to show that homosexuality wasn’t new to India and hitting out at hypocrisy and bigotry around the subject.