Noelia's story has drawn millions of comments, 'likes' and 'shares' on social media, from around the world. 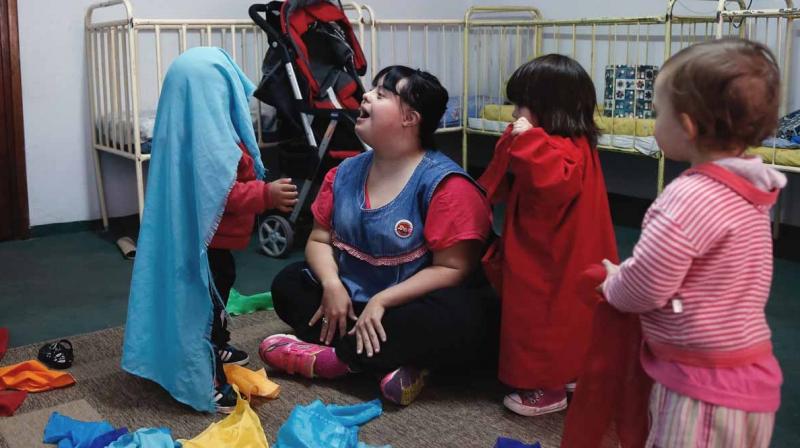 Noelia's story began to get under our skin even before we met her, as we talked about it on the long drive down to Cordoba. (Photo: AFP)

Cordoba, Argentina: We didn't expect the story to be so big. As correspondents in Argentina, we were used to depressing news about corruption and wifebeating. But Noelia Garella's story was different. It was a happy story.

In a news agenda dominated by bloodshed and dirty politics, where was there room for that?

But the tale of Noelia, the first person with Down syndrome to become a full-fledged school teacher in Argentina, took the web by storm -- and us by surprise.

What we thought would be just a solid human interest story went viral. Her story has drawn millions of comments, "likes" and "shares" on social media, from around the world.

Noelia's story began to get under our skin even before we met her, as we talked about it on the long drive down to Cordoba. Ivan, the video journalist who would be filming our report, first read of her in a local newspaper a few years back and suggested following up. Noelia’s story struck a chord, as his 10-year-old niece Maia herself had Down syndrome. Like Noelia was soon to do, the little girl had wowed Ivan with her warm and loving nature.

"Having one of these special people close to you in your life is a blessing. They appreciate things that so-called 'normal' people tend to undervalue. Every day I try to learn more from them," Ivan says. "Which of us are the handicapped ones really?"

Meanwhile Paula, the text reporter, was taken back to her childhood in Venezuela, where a boy with Down syndrome, Agustin San Blas, was in her class at the private Escuela Comunitaria primary school.

Memories of Agustin flooded back to Paula: reading aloud to him, playing in the schoolyard, trying to stop him eating too many sweets. Dancing merengue with him.

Like Noelia's own pupils, Paula and her friends learned to accept their special friend as an equal.

We nearly missed out on reporting Noelia's story altogether. After driving 800 kilometers to Cordoba we were joined by local photographer Diego Lima and first reported on the canonization of Argentina’s first native saint.

Then we went to see Noelia and her family at their home. But that Wednesday, the Jeromito school where she works was closed because of a strike. We filmed her, with her smiling face and long dark hair, talking, dancing, swimming -- everything but teaching.

As Ivan and I fretted, Noelia asked her colleagues to make sure that there would be class on Friday, so that we could get the images crucial to our story. "Hey, Ivancito," she told Ivan. "tomorrow I'll ask them if we can go on Friday to Jermito and be with my little Jermitos."

The shots of Noelia reading a story to her small pupils in the classroom became the defining images of our report.