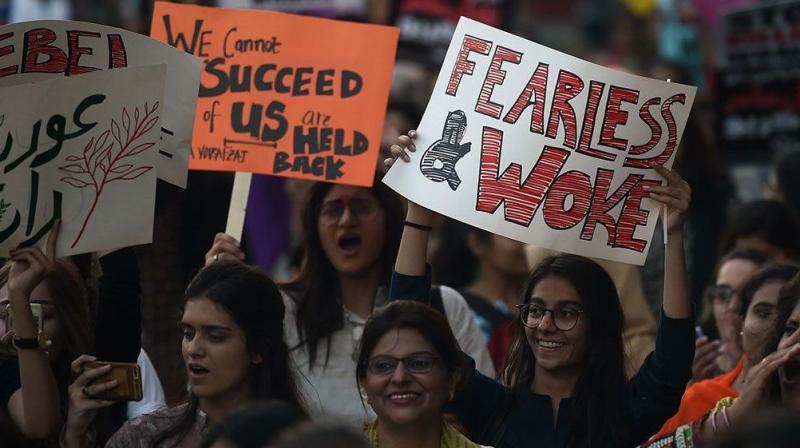 It is a state of turmoil not just in India, but across our borders as well. While the women of Delhi's Shaheen Bagh are holding the fort against CAA, women from Pakistan are raising their voices against the patriarchy with ‘Aurat March’ today.

“The courage of my Pakistani sisters who are planning to march for their rights is brave and beyond words. Women from all segments of society will walk, sing and talk together,” smiles Farahnaz Ispahani, a former member of the Pakistan National Assembly.

The march which has been organised on International Women's Day since 2018  has been a visible and growing proof of Pakistani women finding their voice. The aim of the march is not just to show resentment against male-run society, but also talk about rape, honour killing, forced marriage, sexual harassment, and other issues specific to Pakistan’s women.

For author Naila Inayat, the very fact that a conversation around women is being held in the first place is no less than an achievement.

“Women in Pakistan for long have been dictated by the society on what and how much freedom they can have and to what extent they are allowed to go. Aurat March is the real change and women from a cross-section of the society come together (sic),” shares Inayat, adding, “It is not only to challenge these dictates, but also to raise voice against rampant violence against women, be it domestic abuse, rape, sexual harassment, honour killing, forced religious conversions and more.”

Similarly, professor Nida Kirmani from Lahore University of Management Sciences opines that the march is an important avenue for women put forward a concrete list of demands.

“It is an important first step in building these bridges and starting some critical conversations in our society,” she says, adding that it is time that women came out in solidarity. “It is definitely time, which we can see from the fact that the march is getting bigger and louder with each passing year,” she asserts.

Over the years, not only has ‘Aurat March’ been a baton of sisterhood in Pakistan, but it has also inspired similar organisations like the Women Democratic Front, a socialist-feminist organization, to organize the Aurat Azadi March in Hyderabad and Islamabad. “The young women who are emerging and carrying the torch of courage handed down to them by their predecessors, in many ways are even bolder than their foremothers. I have a lot of hope for them,” Kirmani shares.

From march to movement

While Ishapni feels like globalisation has helped women pass more laws for their own protection, Pakistan, like many other countries in the region, has not moved forward as a society.

“In an environment where several leading political clerics have threatened the march by saying 'those calling for women's empowerment and gender equality are agents of the Devil' are using violent speech to incite their followers. This is very dangerous in a society where acid crimes, honour killings, and forced child marriages are present and accepted widely,” she rues.

So strong is the fear among Pakistani men over the march, that petitions were filed in Lahore High Court against it. However, the Islamabad High Court on Friday reserved its verdict on the petition and in turn questioned the eight petitioners' interpretation of the slogans they had objected to.

With hope and determination as ground-rules, Kirmani believes that Aurat March in the coming years will keep growing and hopefully will spark a wider revival of the women's movement.

“Though that is something we can already see happening in the country as a whole. For now, it is confined to particular classes in urban areas. I sincerely hope that it grows and spreads with each passing year,” the professor muses.

It remains to be seen whether this year’s Aurat Match will top last year, which saw a brave, joyous expression of unity among women, with even supportive men marching alongside. “I believe that if the federal and provincial government and authorities ensure the marchers move in a physically safe environment, this movement will live on,” Ishapani concludes.