The Congress party took advantage of HBO’s drama-filled television series ‘Game of Thrones’ to launch an attack on PM Narendra Modi and BJP. 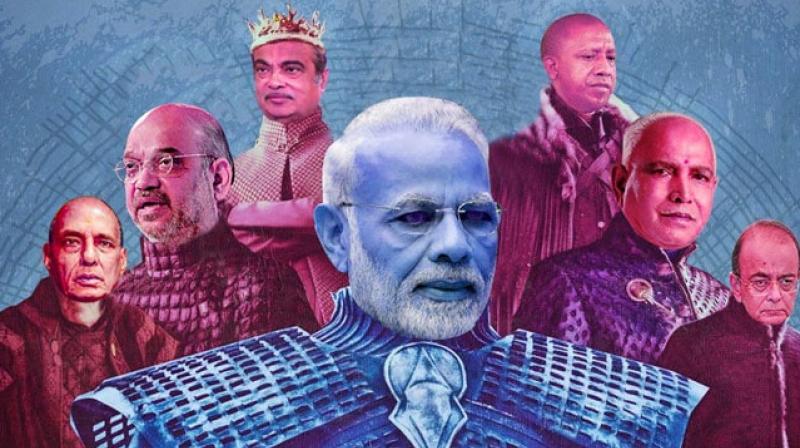 New Delhi: The Congress party took advantage of HBO’s drama-filled television series ‘Game of Thrones’-- back for its hugely anticipated eight and final season -- to launch a scathing attack on Prime Minister Narendra Modi and his Bhartiya Janata Party.

Congress’ tweet gave the show’s tagline a twist and cast Team Modi as characters who keep the mammoth show popular.

For those not too familiar with the show, the Congress party has cast PM Modi as the blue-eyed Night King who leads the army of the dead and is expected to be the fiercest opponent in this season’s final battle for the seven kingdoms aka Westeros.

Union Minister Rajnath Singh has been given the character of Walder Frey who pioneered the ‘Red Wedding’. Amit Shah, doning a gown, has been compared to evil Queen Cersie Lannister. Union Minister Nitin Gadkari gets the Joffrey Baratheon crown. Karnataka chief Yeddyurappa is depicted as Tywin Lannister -- the grey head warrior and the Hand of the King.

UP CM Yogi Adityanath is the show’s most popular and important character — Jon Snow. ‘The King in the North’ -- he is highly speculated to get the Iron Throne and be the leader of the seven kingdoms.

The viral post comes as the first episode of season 8 was aired worldwide on Monday, arousing excitement among fans who had waited for nearly two years.

The Congress’ spoof video received mixed reaction on Twitter with people demanding and speculating a Congress version of the poster.