Directed by R Balki, 'Padman' is a movie based on Twinkle Khanna's book, The Legend Of Lakshmi Prasad. 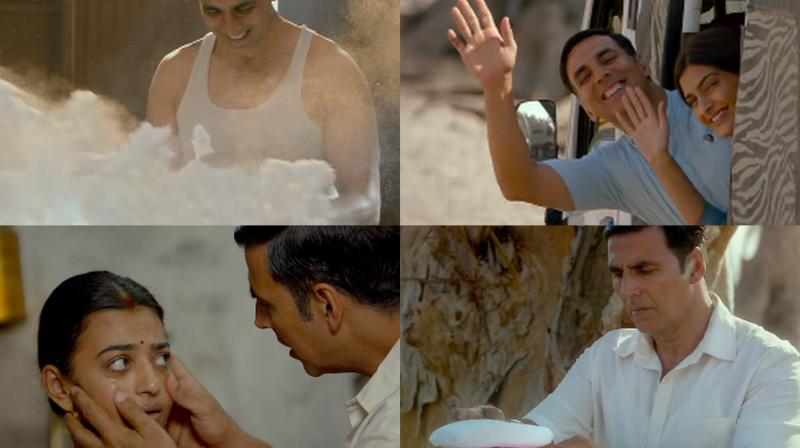 Mumbai: The much-awaited trailer of Akshay Kumar-starrer 'Padman' is finally unveiled and looks like the star will continue his winning streak at the box office with yet another socially relevant film.

The trailer opens with Amitabh Bachchan's narration which introduces us to Akshay Kumar's character. Akshay, who is a progressive thinker wants to create awareness about proper menstrual hygiene amongst the women in the village, where this topic is still a taboo. Akshay's wife (Radhika Apte) is distraught with her husband's persistence. Sonam Kapoor plays a supporter in Akshay's difficult journey.

Within a few seconds in the trailer you realise that the premise of a hero fighting against an orthodox village, conflict between a husband and a wife, and an ultimate triumph of righteousness is very much similar to Akshay Kumar’s previous film ‘Toilet: Ek Prem Katha’. Nonetheless, it is going to be important to see that the subject of menstrual hygeine will be highlighted at this scale.

Akshay Kumar shared the trailer on Twitter. He captioned it, "Presenting the much awaited #PadManTrailer, this one's for the mad ones, the ones who are crazy enough to change the world http://bit.ly/PadManTrailer

Directed by R Balki, 'Padman' is a movie based on Twinkle Khanna's book, The Legend Of Lakshmi Prasad. The book is inspired from the life of Arunachalam Muruganantham, who brought a revolution by introducing a low-cost sanitary napkin machine for rural women, who do not have access to menstrual hygiene products.

'Padman' features Akshay Kumar, Sonam Kapoor and Radhika Apte in lead roles, along with Amitabh Bachchan in a special role.