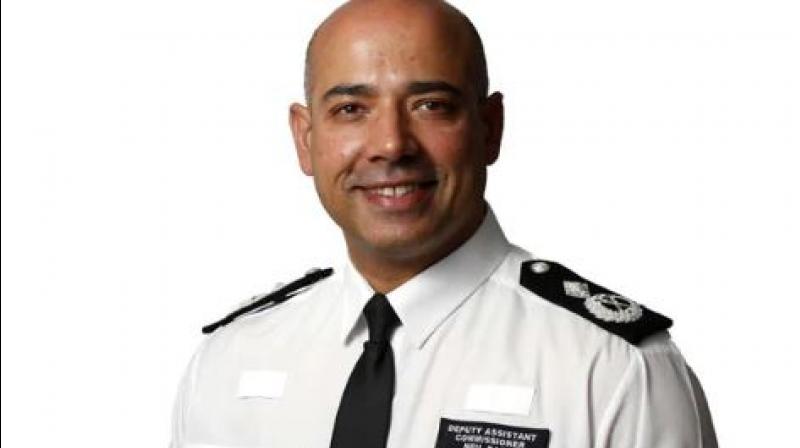 The award citation described Basu's job as 'one of the toughest policing roles in the country' and praised his hard work and dedication in achieving such seniority within the force as the 'first officer of Asian heritage to hold the post in the UK'. (Photo: Twitter | @metpoliceuk)

London: Scotland Yard's first Indian-origin counter-terrorism chief has won the Asian Achievers' Award in the Uniformed and Civil Services category for his contribution to policing in the UK.

Assistant Commissioner Neil Basu, who is the Metropolitan Police's National Lead for Counter Terrorism and the Head of the Met Police's Specialist Operations, had sent a colleague from the force to receive the award on his behalf at the 18th annual awards event, organised by UK-based media house Asian Business Publications Limited (ABPL) Group, here on Friday.

The award citation described Basu's job as "one of the toughest policing roles in the country" and praised his hard work and dedication in achieving such seniority within the force as the "first officer of Asian heritage to hold the post in the UK".

"(British Asians) continue to excel across all spheres of society...I am determined to ensure the government looks more like the country it serves, and to see a new generation creating opportunities for people across the whole of the UK," Prime Minister Theresa May noted in her message for the awards night at Grosvenor House Hotel in Mayfair, London.

Among some of the other key winners, selected by a panel of judges made up of academics and entrepreneurs, included Rishi Khosla, the CEO of unicorn start-up OakNorth who was named Businessperson of the Year, and Adarsh Radia, the founder of the popular Dishoom chain of Indian restaurants in the UK who was named Entrepreneur of the Year.

"The awards have grown in stature year after year and once again we received an overwhelming number of nominations, which is an indication that the success of the British Asian community in various fields continues unabated," said CB Patel, the founder-chairman of ABPL Group and Editor and Publisher of 'Asian Voice' and 'Gujarat Samachar' - the weekly newspapers which invite its readers to nominate achievers for the annual awards.

"Our awards recognise all those unsung heroes within the Asian community - many of whom arrived here as migrants. They have made great strides, not just within their communities and professional sectors but have made huge contributions to British society and the UK economy," added Patel, who presented a special Editor's Award to leading NRI hotelier and Chair of the Bharatiya Vidya Bhavan in London, Joginder Sanger, for his contributions in the field of business and philanthropy.

The Asian Achievers Awards has helped to raise around 1.5 million pounds for various causes and charities since its launch in 2000. This year's chosen beneficiary was Oracle Cancer, a leading charity funding research into head and neck cancer, which attracted nearly 100,000 pounds through donations and an auction hosted by famous British author Lord Jeffrey Archer.

The high-selling auction lots for the night included a shirt signed by the Indian cricket team, which went under the hammer for 5,000 pounds, and a seven-night luxury tour aboard India's 'Deccan Odyssey" train clinching  10,000 pounds.

Leading general practitioner (GP) and honorary secretary of the Welsh Division of the British Association of Physicians of Indian Origin (BAPIO) Hasmukh Shah was presented with a Lifetime Achievement Award.

Other major winners on the night were Indian-origin BBC presenter, author and documentary filmmaker Babita Sharma in the media and arts category and healthcare entrepreneur and CEO of Regent's Park Healthcare Anil Kumar Ohri, who was named Professional of the Year.