Published by Penguin Random House India, the book is a story of an unlikely friendship between a penniless bunny and an heiress squirrel. 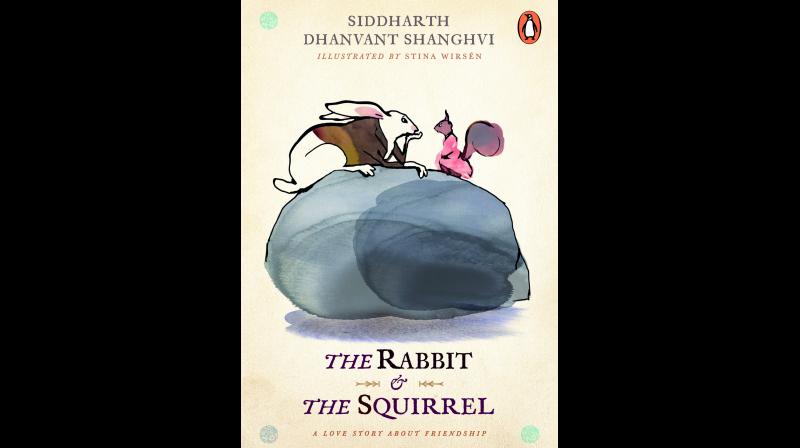 Penguin Random House India recently announced the forthcoming publication of The Rabbit and the Squirrel by Siddharth Dhanvant Shanghvi with illustrations by Stina Wirsen.

One of the most celebrated and accomplished writers of modern times, Siddharth Dhanvant Sanghvi returns after a decade with a modern fable for all ages.

Penguin Random House India recently announced the forthcoming publication of The Rabbit and the Squirrel by Siddharth Dhanvant Shanghvi with illustrations by Stina Wirsen.

The Rabbit and the Squirrel is the unforgettable story of an unlikely friendship between a penniless bunny and an heiress squirrel. When married off to a wealthy boar, little does the feisty Squirrel imagine that she will long most for the free-spirited hours spent with her old friend, the Rabbit, a dropout with a genius for fun.

But even as their fates branch away from each other – the Squirrel drifts from domestic life while the Rabbit enlists with a monastery – the heartbreaking coda of this love story is a meditation on the enduring nature of friendship.

For anyone who has been in love, and wondered what it all meant in the final analysis, this fable will hold a mirror to their heart.

Accompanied with glorious full-colour illustrations by bestselling Swedish author and artist Stina Virsen, The Rabbit and the Squirrel is a sharp, whimsical depiction of urban society, capturing the angst, yearnings and loneliness of modern life. Witty and absurd, with its private air of enchantment, The Rabbit and the Squirrel is impossible to categorize –  at once contemporary and timeless, from a writer acutely alert to the dark surprises of the human heart.

For the reader, this book, like the best of books, ends too soon, leaving a fine ache in its wake.

Speaking about it, the author said, “I wrote The Rabbit & the Squirrel five years ago, as a gift of love for someone. I never thought it would see light of day – it’s publication is a sweet, divine accident.”

He further added, “Hemali Sodhi worked closely to bring The Last Song of Dusk to its readers; I’m absurdly lucky that she remains a great friend and ally to me, and to Hemali Sodhi, Senior Vice President Penguin Random House went on to say, “An achingly beautiful and heartbreaking modern fable, it’s hard not to fall in love with the powerful simplicity of The Rabbit and the Squirrel, and it's a book you keep wanting to return to.”

She added, “We at Penguin Random House are delighted to be publishing this exquisite book which marks Siddharth Dhanvant Shanghvi’s triumphant return as an author.”