Proposition is based on the findings of a paper titled ‘Use of piezoelectric crystals on offshore platforms. 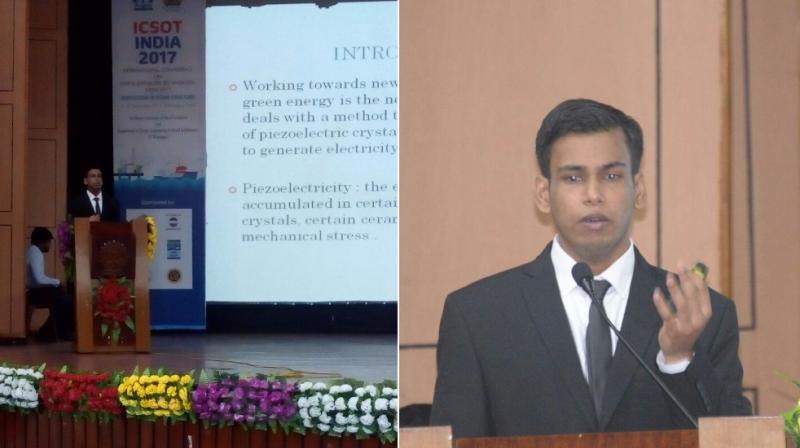 Pratap Chitlangiya speaking on his idea at Indian Institute Of Technology (IIT) Kharagpur.

Pratap Chitlangiya, a 2017 graduate of Department of Ship Technology, Cochin University of Science and Technology, Kochi, Kerala has proposed a futuristic idea for green energy generation at offshore platforms at the ‘International Conference on Ship & Offshore Technology, 2017.

The event was held at Indian Institute Of Technology (IIT) Kharagpur in association with Royal Institute of Naval Architects (RINA), UK.

His proposition was based on the findings of a paper titled ‘Use of piezoelectric crystals on offshore platforms’ authored by Dr. Sivaprasad K and him.

The event saw Chitlangiya propose the use of piezoelectric crystals on offshore platforms.

Thus the vibrations that are usually technical obstacles for naval architects and marine engineers can be used productively for probably the first time in maritime history.

According to theoretical calculations, installing such crystals on one pillar of the platform can produce up to 276 kW of power.

Commercial Viability of the idea will increase with the advance in material science and the advent of piezoelectric crystals with higher piezoelectric constants and lower costs. Moreover, these crystals may be installed both on existing platforms and new ones.

Thus, this may be a viable green energy source in the not so distant future.

Chitlangiya is currently working as a Graduate Engineering Trainee at L&T Ltd. and Dr Sivaprasad K is an Associate Professor at the Department of Ship Technology, CUSAT.