Always known for raising her voice against injustice from men in Bollywood, she has now supported the young actress. 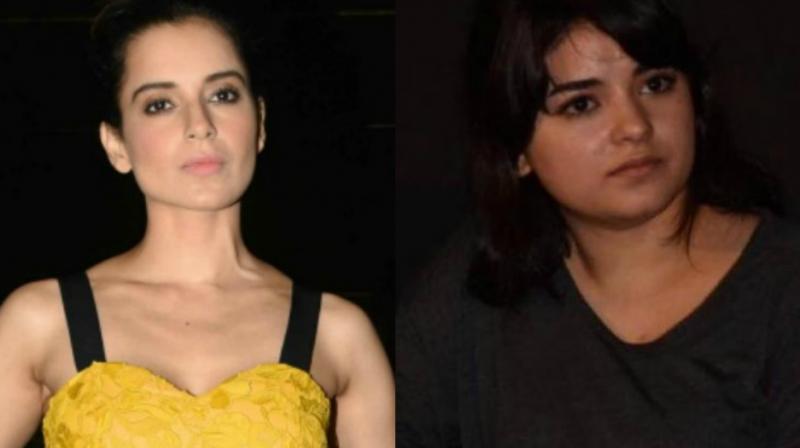 Mumbai: Always known for raising her voice against injustice from the men in the film industry, Kangana Ranaut has lent her support to a young actress facing her own battle.

Zaira Wasim was trolled for recently posting an Instagram video accusing her co-passenger on a flight of molestation.

The ‘Dangal’ actress had broken down while narrating her ordeal in the video, in which says the man was nudging against her shoulder and moving his foot up and down her back and neck.

Trolls have targeted the young actress, some who called it a 'publicity stunt' and some who questioned the authenticity of her claims, and stressed on how she should have raised the issue with the cabin crew or concerned authorities instead of posting a video.

Kangana Ranaut, who was present at Shobhaa De’s book launch on Wednesday, however, voiced her support for Zaira.

“I want to bring to your notice this young girl, who has spoken about this harassment that she faced in a flight. But look at the backlash she is getting. It is so upsetting. I mean there are witnesses, who are claiming that the innocent man just happened to put his foot on the arm-rest and that’s the only crime that the person committed.

If anyone is going to put foot on my arm-rest, it’s open to interpretation, that if this is emotional or sexual harassment or personal because you are in my intimate space, and I will interpret it. Your fellow passengers can’t tell me that his innocent leg was resting,” she was reported as saying by The Indian Express.

She added, “A young girl decides to step up, and say that she has been harassed, there are so many things like your own parents, people who wish you well and your management companies, they tend to tell you, ‘Don’t associate yourself with something dark. You are the girl, who wants this brand, that brand, who wants this and that film.’ For that young girl to go against all of that and speak up.

Now, I am not in that position, so I don’t know what kind of harassment it was. But everyone agrees on one thing that the foot was on her arm-rest. This is wrong. It is very wrong. Why are we judging and trolling her? In this kind of environment, which is so frightening, who will speak up?”

After the video went viral, a man named Vikas Sachdeva was arrested, but his friend and wife defended him saying he had apologised to Zaira and she had said, ‘okay.’

Another passenger on the flight had also stated that the only issue was about the accused placing his legs on Zaira’s armrest and that Sacheva did not misbehave. The person also said that Zaira shouted at him and the matter was settled there itself.

But Kangana would’ve had a more extreme approach if she was in Zaira’s place.

“Most people saying that he was just keeping his foot on the armrest, taking an innocent nap. For me, it is highly offensive. I would have broken his leg. So, I think it is arguable. I am not dissecting or jumping to the conclusion, and no one should play judge whether it is me or media or social media,” she said.

Kangana also didn’t leave the opportunity to take a dig at Hrithik Roshan at the event by referring to ‘exploitation by the person that I worked with’.

She also took a jibe at his recent interview with popular journalist Arnab Goswami by saying, “They are sitting across the table (in an interview) and talking rubbish.”

She also slammed the 'selective journalism' of the journalist who wanted 'to get back' at her, having earlier approached her for the interview, but he indeed chose to talk to Hrithik when she refused to go to his show.