Woman on a mission 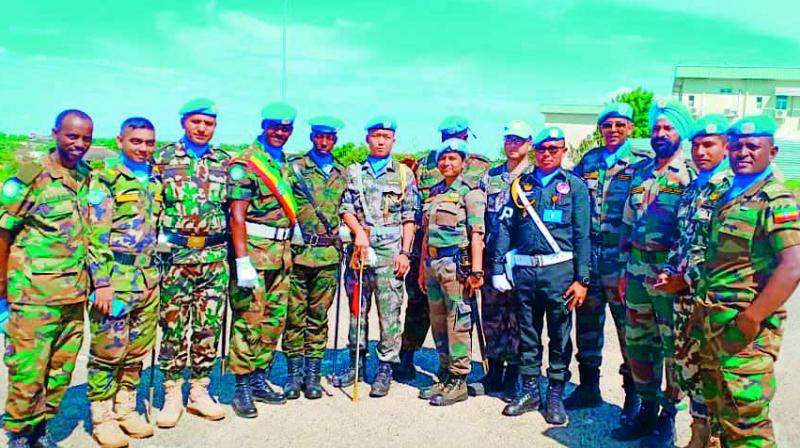 Every girl’s first role model is her father and Indian Army Major Suman Gawani’s story is no different.

The first woman of the Indian Defence Forces to receive the prestigious United Nations Military Gender Advocate of the Year Award, was awestruck by her now-retired father’s firefighter uniform that he wore with pride every day. And when it came to her own career, she chose the Armed Forces.

Gawani received the award from the UN Secretary-General Antonio Guterres at an online ceremony on the occasion of International Day of United Nations Peacekeepers. She was selected to attend specialised training on Conflict-Related Sexual Violence (CRSV) in Nairobi and also participated in various UN forums to demonstrate how a gender perspective can help in protecting civilians, especially from CRSV.

During her UN Mission in South Sudan from November 2018 to December 2019, Gawani was the focal point of contact for gender issues and trained about 230 Military Observers on conflict-related sexual violence.

During the mission, she encouraged participation in joint military patrols to maintain gender balance, irrespective of the hardships under extreme field conditions. Additionally, she also strived to integrate the gender perspective into planning and military activities.

“Serving under the Blue Helmet and wearing the Indian flag in a UN peacekeeping mission is considered an absolute honour and I am proud of that,” she says, adding that the selection criteria for being an ambassador of India and its Armed Forces is very stringent.

“It is a dream for most of the soldiers to serve in a peacekeeping mission. Apart from professional satisfaction that it brings along, the vast exposure that we get in an international operational environment is unmatchable,” says the Major. Presently, India is ranked as the third-largest troop contributor to the UN peacekeeping missions.

Hailing from Tehri Garhwal district of Uttarakhand, Gawani and her two siblings  an older sister and a younger brother who now serves in the Indian Air Force  grew up with having many soldiers around who would share their tales of bravery that inspired her to don the Army uniform.

She joined the Indian Army in 2011 and since then, there has been no looking back. “It has been an enriching journey serving in the army. I have been fortunate enough to serve in the North East and the Northern areas of India,” she smiles.

Apart from combating serious threats to global peace and security as well as gender issues of armed conflicts, Gawani, during the mission, extensively worked towards protecting civilians from the  issues such as sexual violence and abuse that require a comprehensive response from military, police and civilian factors to tackle it effectively.

“Gender does not mean only women, it covers men too, but women, being more vulnerable, are worst affected. If there is more participation and knowledge about the issue, the crimes will automatically reduce,” explains the officer and adds that sensitising people about gender will help them understand their rights and duties too.

When asked if deploying women in peacekeeping missions helps communities in conflict zones open up about their issues, Gawani’s answer is affirmative.

“Women can play a very big role in peacekeeping. Local populations in host countries often feel more comfortable liaising and sharing information with military troops that include women alongside men.

And by obtaining better information, we can protect these communities better,” observes the officer and opines that women have a natural instinct which makes both men and women more comfortable while communicating.