Bob Montana illustrated Archie, Betty, Veronica and Jughead from 1942 until his death in 1975 at age 54. 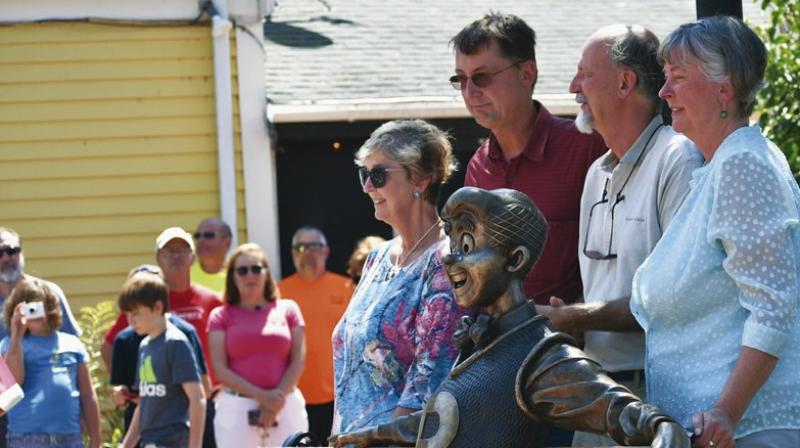 A statue of the comic strip character Archie sits on a park bench, created by sculptor Valery Mahuchy, as it was unveiled in Community Park, Meredith, Thursday, Aug. 9, 2018, as part of the town’s 250th anniversary celebration. Archie illustrator Bob Montana lived in Meredith for 35 years and worked many local residents and scenes into the comic strip until his death in 1975 at age 54. Posing with the statue are Montana’s children, Paige, Donald, Raymond, and Lynn. (Photo: AP)

MEREDITH, N.H. — A life-size bronze statue of a red-haired, freckle-faced Archie is now greeting visitors at a New Hampshire town in honour of a local man who drew the comic book character and his group of wholesome teenage friends.

Bob Montana illustrated Archie, Betty, Veronica and Jughead from 1942 until his death in 1975 at age 54. He lived for 35 years in Meredith, a town of about 6,000 residents in the heart of the state’s Lakes Region.

The statue of Archie sitting on a park bench was commemorated Thursday in Meredith’s Community Park to coincide with the town’s 250th anniversary.

Montana brought the Archie Andrews character to life when he drew the first “Archie” comic strip while renting a cottage on Lake Waukewan in 1942.