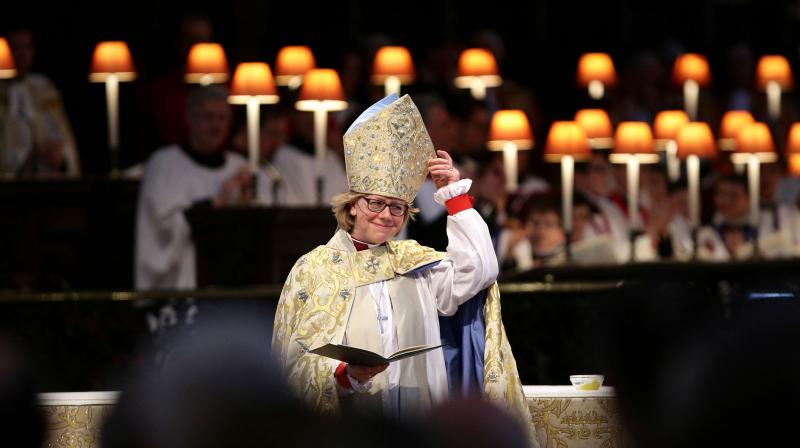 Sarah Mullally speaks during a service to install her as the 133rd Bishop of London at St Paul's Cathedral in London on May 12, 2018. (Photo: AFP)

Sarah Mullally was installed as the first female Bishop of London on Saturday, becoming the third most senior cleric in the Church of England.

Mullally was installed as the 133rd Bishop of London at St. Paul's Cathedral on International Nurses Day -- Florence Nightingale's birthday -- echoing the new bishop's former career as a nurse.

She followed the tradition of knocking three times on the cathedral's Great West Door with her pastoral staff. She is now the state church's third most senior cleric, after the archbishops of Canterbury and York

In her sermon, she spoke of the challenges facing London, particularly escalating knife crime, and referenced historical sexual abuse within the church. "We need to speak up for the whole of London, to work to challenge the violence and the crime that have led mothers to clean their own children's blood from our pavements," she said. "Could there be a starker image or a more urgent wake-up call for all who love this city, who believe it can have an even better future?"

The Church of England's general synod gave final approval to a historic reform allowing female bishops in 2014 after years of bitter wrangling between factions who opposed and supported the move.

The CofE consecrated its first female bishop in January 2015. Women have been able to be ordained as priests in England since 1992 and now make up a third of the clergy.

The CofE separated from the Roman Catholic Church in 1534. It claims that more than 40 percent of people in England regard themselves as members. It is the mother church of the global Anglican Communion, which has around 85 million followers in more than 165 countries.

Other Anglican churches around the world have been appointing female bishops for years. The first was appointed in the United States in 1989.