Boxer Sadaf Khadem to break a barrier for Iranian women 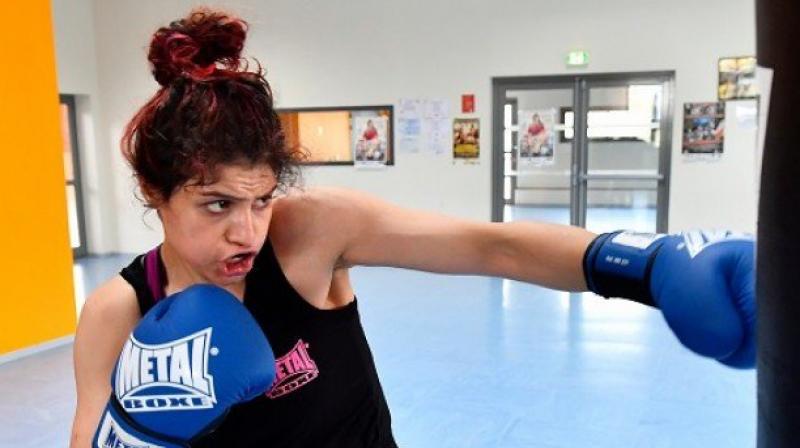 Khadem took up boxing four years ago, being compelled to train in private fitness rooms since public boxing facilities are reserved for men. (Photo: AFP / File)

Royan: Two years after a clandestine impromptu training session on the hills of Tehran, Sadaf Khadem will become the first Iranian woman to contest an official boxing fight, hoping to lead the way in the Islamic Republic.

The bout will take place in western France on Saturday after the 24-year-old met with Frenchman Mahyar Monshipour, an Iranian-born former super bantamweight world champion.

“In 2017, I went to Iran for a promotional event and I ended up organising a public training session on the hills overlooking Tehran. About 35 people showed up, and there were six women,” Monshipour told Reuters.

“She contacted me on social media to ask me to make her box but I told her it was not possible. Then about a couple of months ago the Iranian federation opened the door for women boxing and we asked them to set up an event.

“But it became apparent that it would not be possible because they wanted a female coach, female referee... so with the help of the Sports ministry we made her come to France.”

Next week Khadem will return to Iran, where Monshipour expects her to be met with ‘popular jubilation’.

He will, however, travel back with her, just in case, to a country where women have started to take off their head scarves in a peaceful protest against the compulsory hijab.

“If she ends up in custody, I will not let her down,” he said.

Khadem took up boxing four years ago, being compelled to train in private fitness rooms since public boxing facilities are reserved for men.

In Iran, women were allowed to attend a men’s soccer game for the first last October.

“It is easier for wrestling and weightlifting because they are more in our culture,” Khadem told Reuters after a training session on Thursday.

Some women fight but the bouts are illegal and being held in Turkey with no medical insurance. In France, Khadem trained at the National Institute of Sport and was handed a French licence to practice and fight.

For the first time she trained among men, and she burst into tears at the end of a session, overwhelmed by her emotions.

“My parents were worried when I started boxing but they saw I was really loving it so now they are supporting me. I’m now steaming ahead,” said Khadem.

“I have been waiting for this moment for so long.

“I hope this first fight will pave the way and that I will go as far as I can to have my name in the history of Iranian boxing.”

But Khadem, who weighed around 100 kilograms when she started boxing compared to 68 now, is on a mission.

“I hope to break the dam. I don’t matter. What matters is Mahyar, who made this fight possible. It could have been anyone instead of me,” she explained.

“In my country, there are a lot of women who box, this fight is also for them.”

Khadem, however, took her chance, adding hours to her fitness coach job to get ready for a 3x2 amateur bout where she will sport Iran’s colours.

Downplaying her achievement, she said: “Everyone has difficult moments in their lives. In every country it is difficult to do some things. You have to overcome the hurdles.”

Her opponent, local boxer Anne Chauvin, said she was ‘happy to be part of this fight to help the cause of women’.