Berdymukhamedov took the helm of the Central Asian state over a decade ago after the death of its repressive first president. 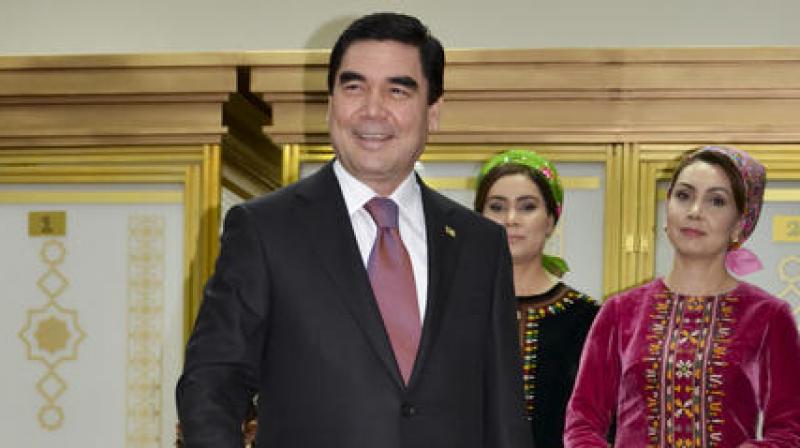 Moscow: Turkmen President Gurbanguly Berdymukhamedov, who strolled to a fresh seven-year term in a Sunday vote, went from personal dentist of the country's eccentric former leader to head of state, before recreating much of his repressive predecessor's personality cult.

Berdymukhamedov took the helm of the Central Asian state over a decade ago after the death of its repressive first president, Saparmurat Niyazov, who had styled himself as "father of the Turkmen people."

At the time, hopes bloomed that Berdymukhamedov might open up his isolated, gas-rich ex-Soviet homeland to the wider world.

He moved to strip away some of Niyazov's excesses but did not loosen the authorities' iron grip -- and has since erected a glitzy monument to himself.

Berdymukhamedov, 59, cruised to victory in elections on Sunday against eight token opponents.

Analysts say he could be gearing up to rule for life after a constitutional change last year.

Berdymukhamedov "is the 'decider' for the state of Turkmenistan," US diplomats wrote in a 2009 diplomatic cable that was subsequently leaked.

From teeth to the top

Born on June 29, 1957, the only son in a family of eight children, Berdymukhamedov was a career dentist who treated Niyazov's teeth before being appointed health minister in 1997.

After the strongman -- who had dominated Turkmenistan since independence from the Soviet Union in 1991 -- died suddenly in 2006, Berdymukhamedov ascended to the throne almost immediately with vital backing from the security services.

Niyazov had made the desert-bound country one of the world's most reclusive nations, building a cult of personality that saw him rename a month after his mother and erect a golden statue of himself that rotated with the sun.

In the early years of his rule Berdymukhamedov took steps to dismantle the omnipresent symbols of the previous leader's rule -- including removing portraits and shifting the statue from the centre of the capital Ashgabat to a suburb.

But very quickly he became yet another authoritarian leader in Central Asia.

There is no free media in Turkmenistan and horse-mad Berdymukhamedov enjoys fawning total coverage in the state press.

His poems are published on the front pages of the newspapers, a choir of thousands performed a song he wrote and even his attempt at DJing at his grandson's party was broadcast on the national news.

A small crack appeared in 2013 when a video surfaced online of the president taking a spectacular fall from his favourite mount during a race, but state media blanked the news.

That was only a minor blip, though, and in 2015 the authorities unveiled a golden statue of Berdymukhamedov atop one of his beloved horses with a dove perched on his hand.

While Niyazov kept his family mostly invisible from the public, Berdymukhamedov's son, Serdar, was elected to parliament in a by-election in November last year.

The strongman also frequently appears in public with his teenage grandson Kerimguly, another keen equestrian.

Despite claiming after taking power that his guiding principle was "moderation" Berdymukhamedov has splashed his nation's gas wealth on vast pricey showpieces.

He built a golden-domed presidential palace worth a reported $250 million (234 million euros) in Ashgabat, which is in the Guinness Book of World Records for boasting the whitest marble in the world.

Last year the landlocked country opened up a new bird-shaped airport for the capital worth over $2 billion, despite seeing only a trickle of tourists.

But big-spending Turkmenistan has faced pressing challenges due to the plunge in global energy prices over the past few years.

Berdymukhamedov has publicly mused about making the country's 5.2 million citizens pay more for gas, electricity and water supplies that used to be free.

Officially Turkmenistan for the past two decades has described itself as neutral in world affairs but the country has become increasingly dependent on China, which buys over three-quarters of its hydrocarbons.

While turning its attention eastwards it has got in spats with Iran and former master Russia, accusing them of failing to honour gas imports.

But despite the signs of uncertainty that saw the government slash the value of its manat currency by a fifth in 2015, official media never fails to remind citizens they are living in the "era of supreme happiness of the stable state" declared by Berdymukhamedov in 2012.