Peak hour travellers were serenaded by tribute acts performing on a stage erected on the platform. 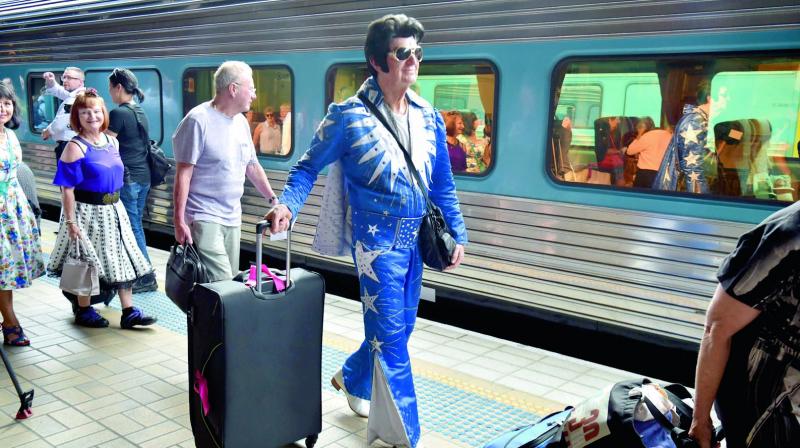 Elvis fans board a train to take them to The Parkes Elvis Festival from Sydney on Thursday. (Photo: AFP)

Sydney: Sequin jumpsuits and Vegas showgirls outnumbered shirts and ties at Sydney’s Central station on Thursday as hundreds of Elvis fans boarded a train bound for a festival dedicated to The King.

Peak hour travellers were serenaded by tribute acts performing on a stage erected on the platform, while poodle skirts twirled at one of the city’s busiest commuter hubs as fans danced away the wait for the 9.20am Elvis Express to Parkes in the Australian countryside.

The annual Parkes Elvis festival, which last year attracted more than 20,000 people, features five days of tribute concerts, memorabilia exhibits and even a Priscilla Presley look-a-like competition. “It’s unique in its own right, especially if you’re an Elvis fan and you love Elvis,” said Johnny Angel, one of the hundreds of tribute acts from all over the world performing at the event.

“You got to do this once in your lifetime, it would be grand. You should put it on the bucket list. For those fans I’m going to sing Viva Las Vegas, because that is the theme — so I’m gonna sing that one, Don’t be Cruel, Teddy Bear and some love songs,” he added. Held in the rural town of Parkes, 350 km west of Sydney, the festival began 25 years ago as a modest Elvis-themed birthday party and has since ballooned into a tourism boon for the area, with voer 120 events scheduled over the five days.

“Absolute flat-out dancing and partying — every concert, every movie and every karaoke (song),” said Michelle Campbell, from behind her gold chromed Elvis-signature sunglasses, when asked what she planned to do at the festival. “(It’s) his music, his dancing, his costumes,” the 50-year-old fan added of the lure of the music icon. For others, the excitement of five days in the Australian countryside, embracing the Graceland legend, is difficult to put into words.