Newsmakers   11 Sep 2018  Dysptopia may have bits of philosophy but it is lot more psychological: Manoj Jain
Newsmakers

Dysptopia may have bits of philosophy but it is lot more psychological: Manoj Jain

Dystopia deals with different stages person faces in one’s life and how one is affected by childhood episodes and choices in adolescence. 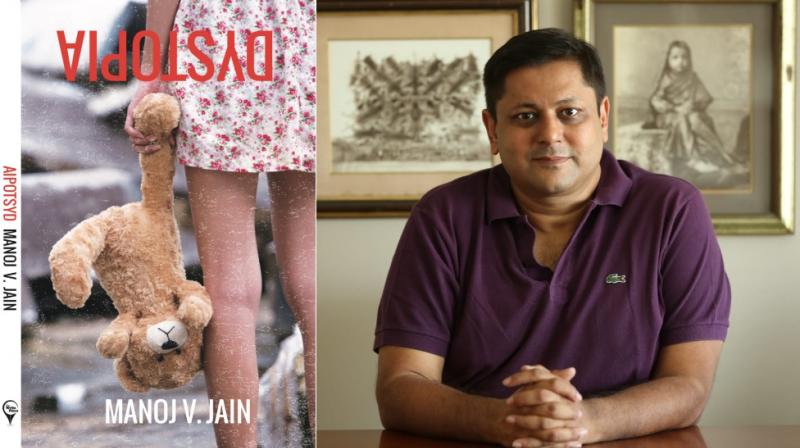 I have strongly believed that incidents that take place in one’s childhood leave a strong conscious and unconscious stamp in the psyche of a person, says author Manoj Jain.

Growing up, each and every individual has certain experiences which consciously or subconsciously help shape the person into being the adult he/she is.

The incidents that take place in one’s childhood leave a strong conscious and unconscious stamp in the psyche of a person and it plays out during the person’s lifetime, very often subconsciously.

Celebrated author Manoj Jain recently launched his next book "Dystopia" which deals with different stages a person faces in one’s life and how one is affected by childhood episodes and their choices in adolescence.

In a conversation with this correspondent, the author shares more about his book, what the manuscript deals with and what he is working on next.

Tell us a bit about the book. What made you pen it?

The theme of the book- parenting, childhood, adolescence, growing up has always been a topic very close to my heart and I did my studies in psychology with a view to be a counsellor for this age group.

I have strongly believed that incidents that take place in one’s childhood leave a strong conscious and unconscious stamp in the psyche of a person and it will play out during the person’s lifetime, very often subconsciously.

Therefore, I decided to write my next book using the above points as the basis. In the book it is assumed that during the life cycle, people travel through different kingdoms. When a child is born, he enters the blissful kingdom of Shambala and as soon as he attains puberty, he gets sucked into the kingdom of dystopia. There is a spirit guide there who helps and records the child’s stay there.

It is a fiction but it has parallel narratives- one is a simple story of old school friends meeting after several years over a reunion dinner and side-by-side is the spirit of Dystopia , the teenage years stage

How would you define the book?

The book is just a simple story of relationships but gets one step deeper into a person’s psyche so could be a more disturbing read. Although there is a death of a class mate which gets resolved 20 years later at the dinner party, in no way is the story a whodunit because the opening prologue shows that she had killed herself. The situation in the book was not of mystery as much as to highlight a viewpoint.

While the book is certainly not intended to be a self-help guide, readers have told me that it has been therapeutic in some ways, disturbing in others and like a notional visit to a psycho-therapist.

My books may have small elements of philosophy but it has a lot more psychology- people often confuse the two.

Introspection often leads to the very Pinteresque pauses and silences, have you made use of those in your book? Specially when it all seems to hover over a topic during a dinner conversation.

I wish I could achieve the famous Pinteresque pauses as silence is so powerful especially in a play and on stage or in a film. The book is based on a dinner party so is likely to have awkward moments which it does but lesser of the pauses than expected outwardly. If the book were to be filmed, then the Pinteresque pauses would certainly be a major element.

When I am writing the book, I try to keep the conversation natural and yet interesting – this is not as easy as it sounds because often there is a clash. When you want to keep the conversation natural, you must add how people would normally talk: they will greet each other when they meet, ask about the kids, grumble about the traffic and why they were delayed, praise the house. To make the conversations in the book seem real and not like some setting in a drama, as an author, I do incorporate it in the scenes although a reader may find that part banal.

On the other hand the bulk of the conversation and internal thoughts are the key to the book- these need to be relevant and interesting so incorporating too many pauses is difficult. I show the thought process going on in the characters mind but it is not necessary a stop in conversation.

What does self discovery mean to you?

All humans, since birth, go through situations that create dissonance within them. To handle it, very often feelings are repressed – sometimes so deep that they are not easily identifiable to the person and yet keep affecting what the person says and does.

A second aspect is our different ideas of self- one is what we truly are, a second is what we think we are, a third is what we wish we are or strive to be and the last is what we want others to believe we are. If the differences between these many ‘selfs’ are too high, it creates a lot of mental anguish.

My idea of self-discovery incorporates the above two points: resolve things of the past so they do not continue to haunt and subconsciously influence the way we speak and act as well as try and reduce the gap between who I believe I am and who I want to be and who I portray myself.

The book gives deals with childhood and teenage years which every adult person has been through. It gives insights in four key areas of parenting styles, psychological stages of development, identity crisis in teenagers, and the powerful effects of childhood

It’s a book especially relevant to parents of children of any age.

Yet it is an interesting book of fiction so there are no textbook passages to get this relevant psychological study. Another fact on most of my books is that I keep them short- in today’s world, where everyone has no time and yet is bombarded with excessive information on social media, I think a small book which is packed with sufficient bite is the way ahead.

What's next for you?

After every book, I have said that the last book published is my last piece of work and yet I simultaneously start work all over again on a new project.

This time too I claim to myself that no more books to be published, no more marketing and checking sales numbers (I hate that part of the job).

So I am writing 25 short stories, with a psychological backbone, which also intend to be a bit disturbing to the reader as they touch chords that exist in every person and they are topics that one is uncomfortable to discuss.

These short stories are not for publication as of yet as they are being collected to present to my wife on our 25th wedding anniversary next year.